After being locked out of my blog for several months due to all of the changes to Google plus, I was able to regain access in a different province of all places thanks to some save info on a different laptop...phew.

Anyways, better late than never, here is my response to Eric's challenge, in which Chris nominated me.

I'd like to thank Eric for coming up with the idea and Chris for nominating me.  I have been exposed to railroading for my entire life.  My father comes from a railroad family which lived in a small English town on the Gaspe Peninsula called New Carlisle.  New Carlisle was the division point between the Chandler Sub to the east and the Cascapedia Sub to the West.  The line was originally built during the early 1900's by the Quebec Oriental Railway and the Quebec and St Lawrence Railways, both of which were absorbed into Canadian Government Railways, and later the CNR. 1909 saw the first train to New Carlisle and ten years later the first train reached the town of Gaspe. From the lines inception in the early 1900's to its sale to the Quebec Railway Corporation in 1996, I have had at lease one relative employed by the railway in the region .  I can remember the better days vaguley between about 1995 and 2002, when there was a passenger train every other day and a freight each way every day.  The region was hit hard between 1998 and 2006, where the closure of several large paper mills and a once prosperous copper mine closed, spelling the end of freight traffic on the line. In 2010, the eastern end of the line was declared unsafe due to several aging bridges and VIA's Chaleur began turning at New Carlisle indefinitely.  In the summer of 2013, the rest of the line was deemed unsafe and VIA's Chaleur was terminated until further notice.  Other than a sporadic work train in the summer and the odd high rail truck, the line is all but abandoned.  The only reason the tracks haven't been lifted is because the right of way and all rail infrastructure was purchased by the four counties on the Gaspe between 1998 and 2008. 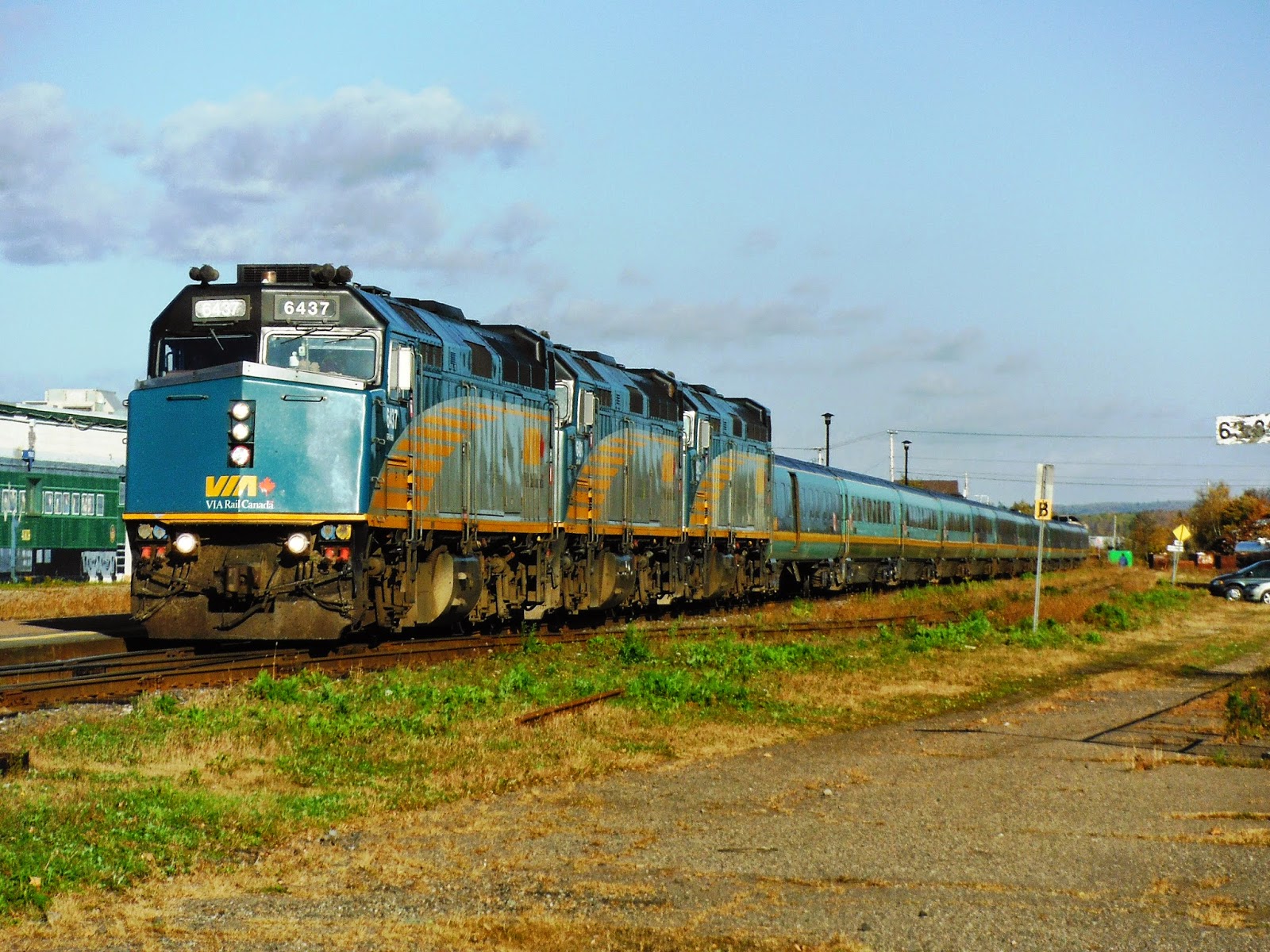 This second photo is actually one of my personal favorites and I regard it as the best railfan photo I have ever taken.  There is something that is just right about this photo, whether it is the fresh ballast, sparkling consist or the bright fall colours.  I took this one on 18 November 2011, roughly a quarter mile east of the station in New Carlisle.  This location is about halfway between the station and Christie's Rock to the east and represents my favorite stretch of track to view trains on. 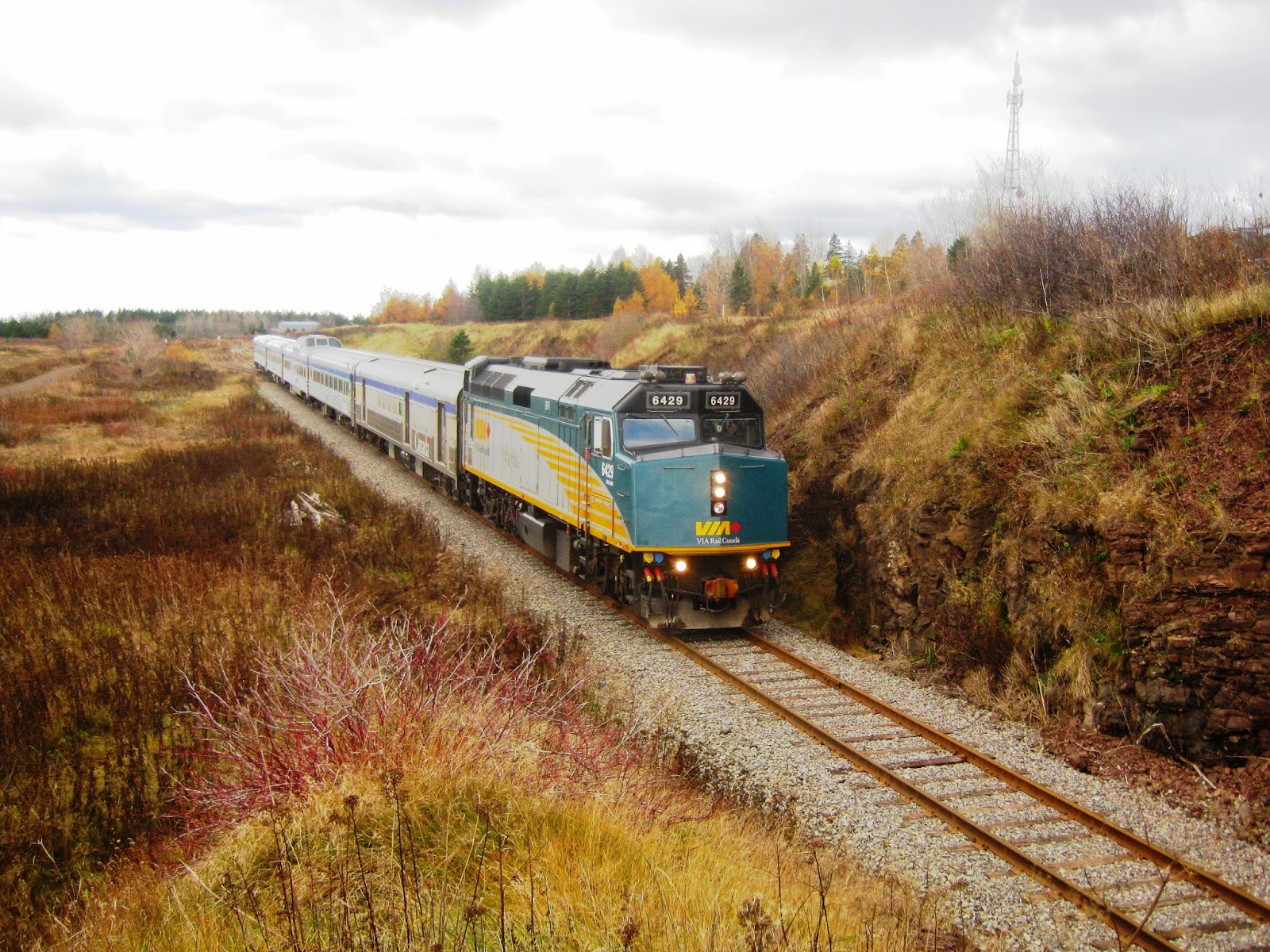 After arriving in New Carlisle last summer I walked down to the yard the following morning as I always to see what was going on.  I was looking forward to this trip as it would be the first time I had ever seen the crews wye The Chaleur; as they had been turning the train in New Carlisle for some time due to track conditions further east.  I was surprised to see a work train sitting on one of the yard tracks. The Chaleur arrived about a half hour late and I stuck around to watch the crew wye the train.  I was able to take snap this shot of The Chaleur pulling up past the work train during the turning operations.  The date was 8 August 2013.  I received word from a friend of mine who also happens to be one of the last remaining engineers with the freight company on the line that they would be heading west to Matapedia to refill the ballast hoppers the following morning. I arrived at the yard office and met the crew at 6 AM, watched them cold start the locomotives, got a great tour of both units and saw them off.  We arrived home to PEI the following week where I learned that The Chaleur had been sidelined indefinitely due to a mix of track conditions and political reasons. The date was 10 August 2013. As is turns out, I was able to catch what just might be the last VIA Rail Chaleur ever, purely by coincidence. 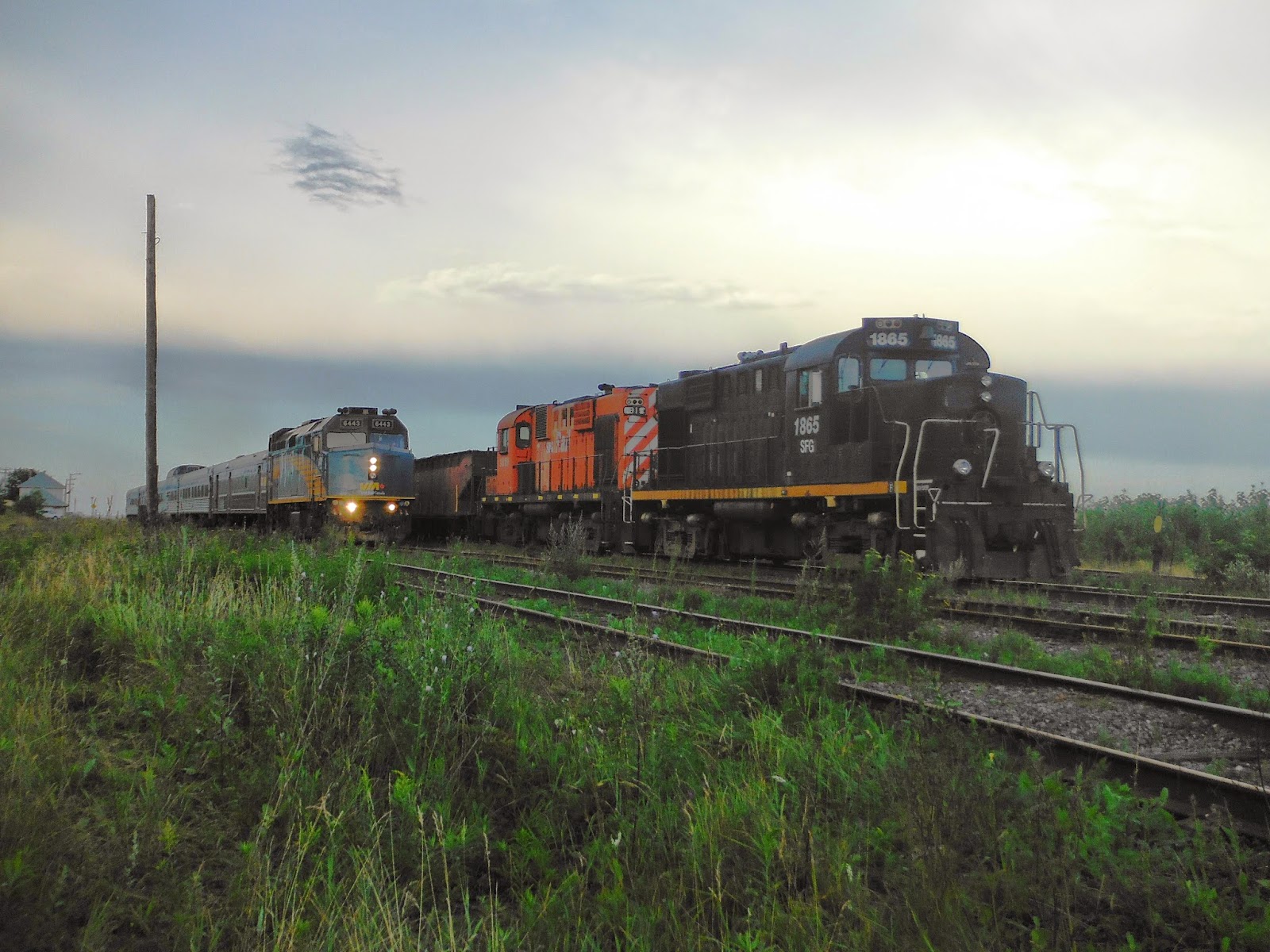 I took this photos back in August 2008.  After watching trains for years, I decided to invest in a camera.  I shot the train crossing Green Road and then as they prepared to leave the station. Trainman Boyd McBrian is seen doing his final checks of the consist before giving the all clear. Engineers Peter Douglas and Gilles Lamy are already aboard.  Back at the station, Dominique Leger, the long serving station master at New Carlisle assist the last of her passengers onto the train.  The first three names represent the last of the men based out of the original crew base of New Carlisle to work for VIA Rail.  All of them have since retired. 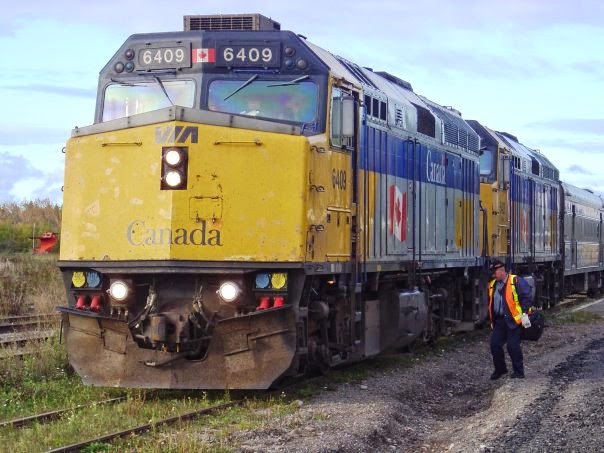 Due to the VIA F40PH-2D rebuild program at Cadrail, VIA began experience power shortages across its network.  In the past, two locomotives had always been placed on the consist for the months of Sepetember, October and November, to provide extra traction power.  Wet leaves on the tracks had been an onging issue ever since the last regular freights ceased operation east of New Richmond in 2006.  Due to the power shortage, VIA leased CN 9416, a GP40-2L(W) to haul The Chaleur.  For the duration of the fall, 9416 was added onto VIA 14/15 at Matapedia after the train had been split from The Ocean and stored at Matapedia when not in use.  On 10 October 2009, I was lucky enough to catch the first CN unit on the line over ten years (since the end of the CANAC leased MLW's between 1996-97).  9416 had been one of two yard engines in Campbellton for some time, and continued to do so after 2009, however one day it never came back.  During a trip over to Truro for the train show last night, I found it in D yard, assigned as the yard power there, still without a proper noodle on the nose five years later. 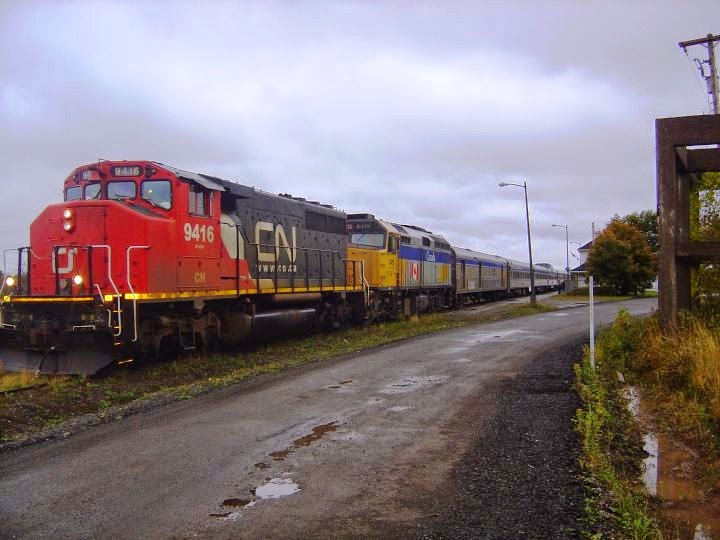