Although Port Daniel was never really a large stop on the railway, I've always found it to be a nice little town intertwined with the railroad much more than many other towns due to its unique layout. Currently, Port Daniel-Gascons (now merged with several surrounding communities) has a population of close to 2500 persons, mostly French speaking.  The town is unique in that the railway doesn't just run north or south of it but rather right through the center of it, unlike the majority of Gaspe communities.  The town contains two large bridges, a station and the only tunnel on the entire line.  The bridges cross the "Petite Port Daniel" River to the west and the "Grande Port Daniel" River to the east.

Located at Mile 22.5 of the Cascapedia Subdivision, Port Daniel has never been much more than a station stop for east and westbound passenger trains.  According to CN timetable #82, dated Sunday, April 26, 1953, Port Daniel once contained a passing siding with a 12 car capacity and a second track with a capacity of 9 cars.* The most recent timetable I have access to, CN #85, dated Sunday, May 29, 1983, lists the length of the passing siding as 700ft, but gives no length to the other track.  I assume that this mysterious other track is simply a team track due to its proximity to the station.  Given the lay of the land (steep hillside north of the tracks, steep dropoff to the Barachois to the south) there is also very little room for any sort of a building here, although it is possible that there was a separate freight shed on this track at some point.

The only record I can find of rail-serviced industries in the area stems from timetable #82, at Mile 26.4, about a mile east of the station, referring to a place called "Derairiche".  Apparently this stop had a double ended siding (points facing east and west) and a capacity of 6 cars.

Other than that the "footnotes" for the area are as follows:


Below is a Google Maps image, overlaid with the track diagram of the area.

Note that the mainline is highlighted in red, yellow denotes the two bridges whereas the green area depicts the tunnel. The red box under "Port Daniel" represents the station.

Below are a series of photos I took on November 10, 2014, after convincing everyone to hop in the car and take a drive down to Port Daniel for a look around.  The town of Port Daniel is located at the mouth of a small inlet, as seen from a vantage point several kilometers west on Rte 132. 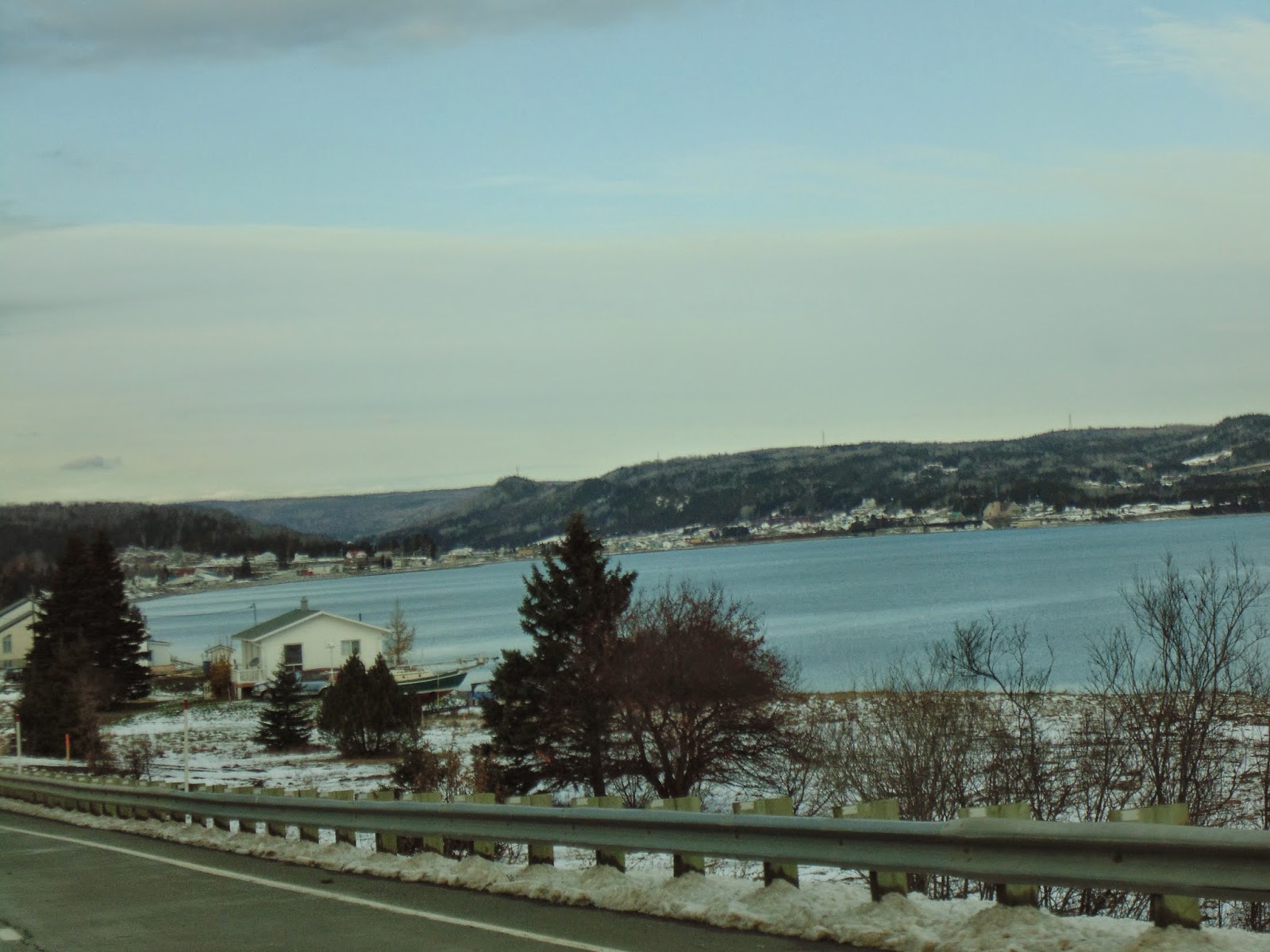 The station itself is very well preserved and is one of three on the line that has been designated as a provincial historic site. 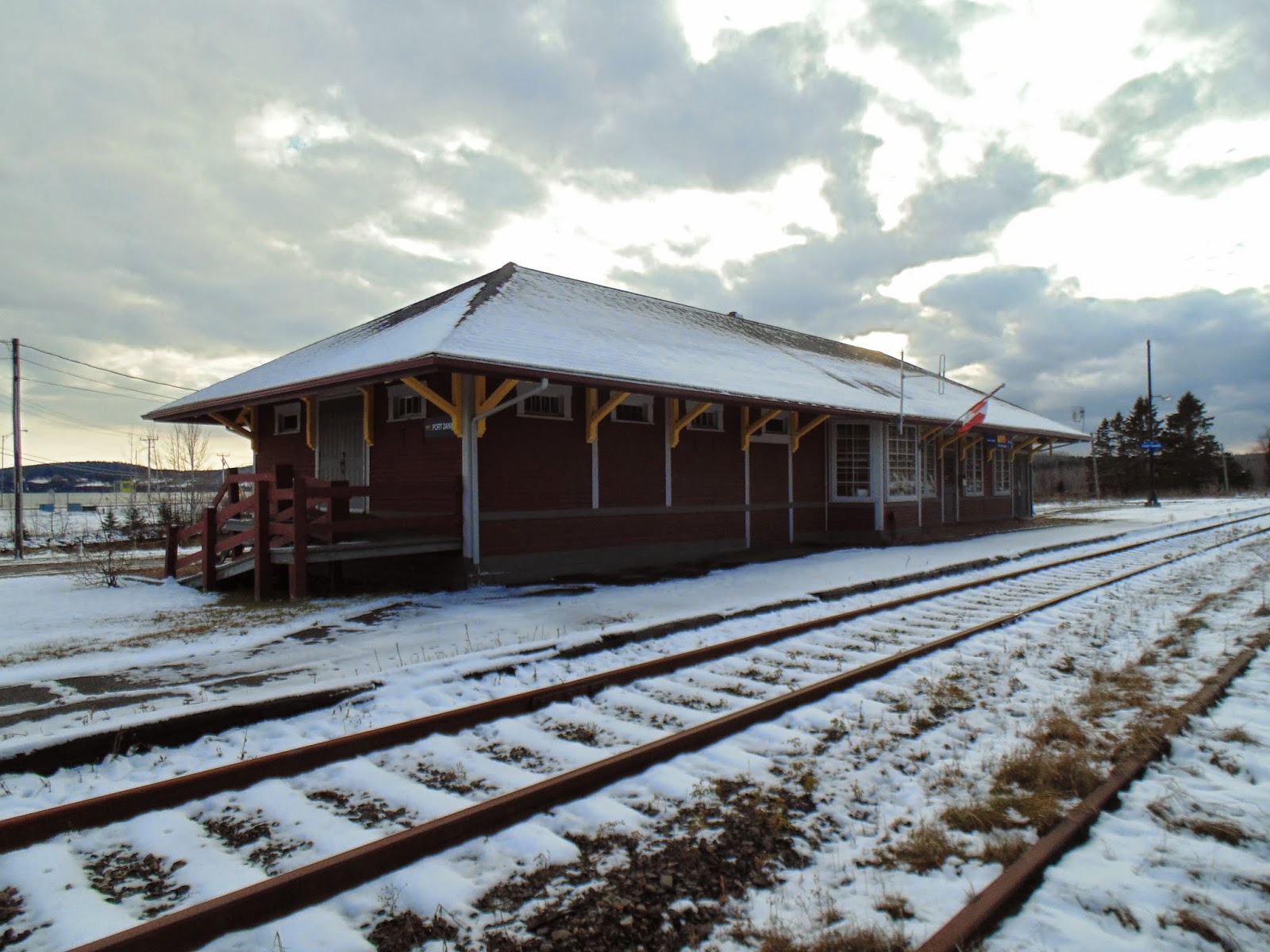 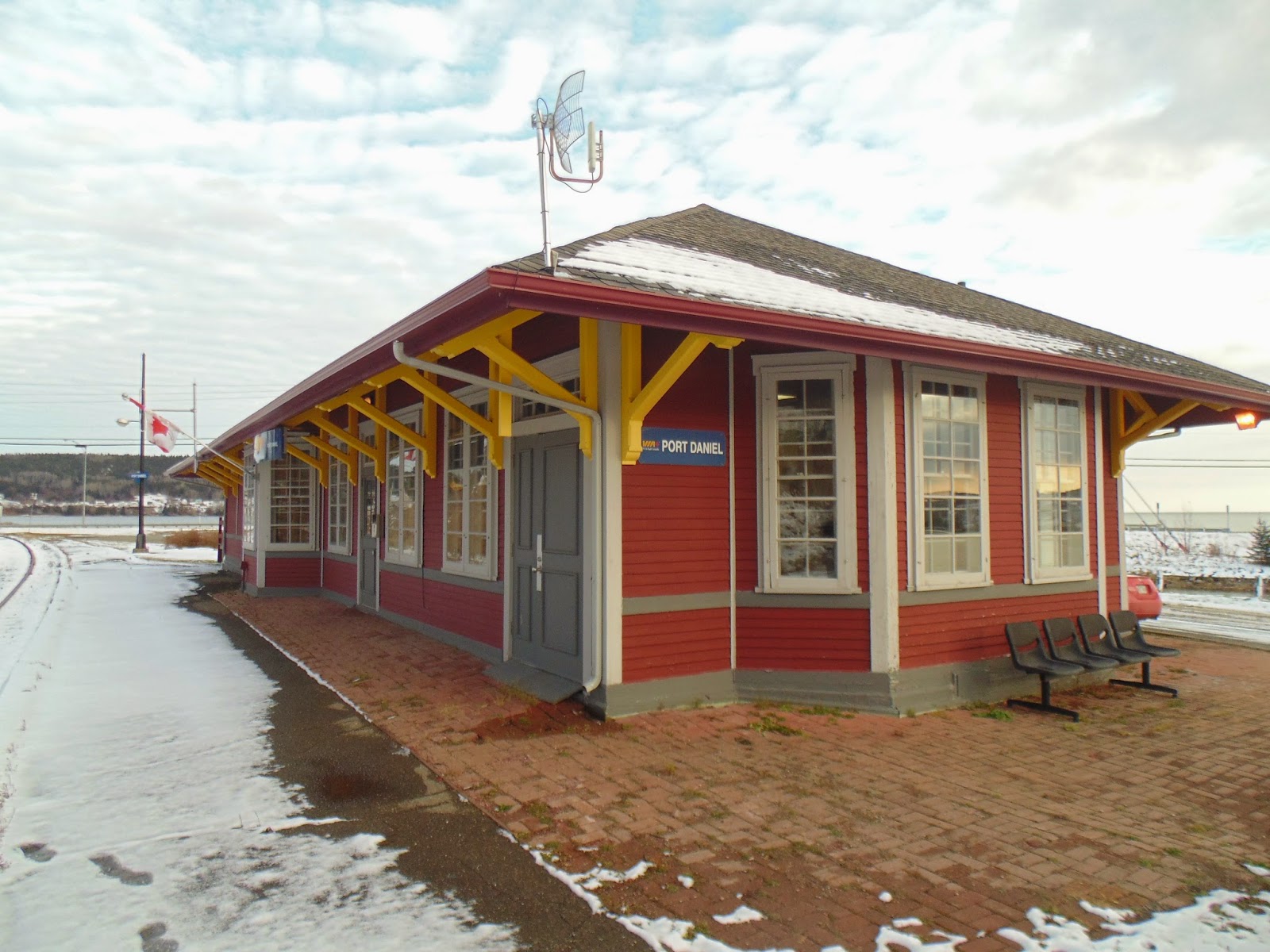 You can see where what's left of the passing siding below, which ends in front of the station.  Presumably the east facing point was removed during some road construction on Rte 132 (about 250m behind me in this photo) and never replaced.  The west facing point has also been removed however its remnants are still very visible.  This follows suit with almost every other passing siding on the line, most of which having been removed for one reason or another in the mid to late 1990's by the various entities that owned the line after the end of the CN era in 1996. 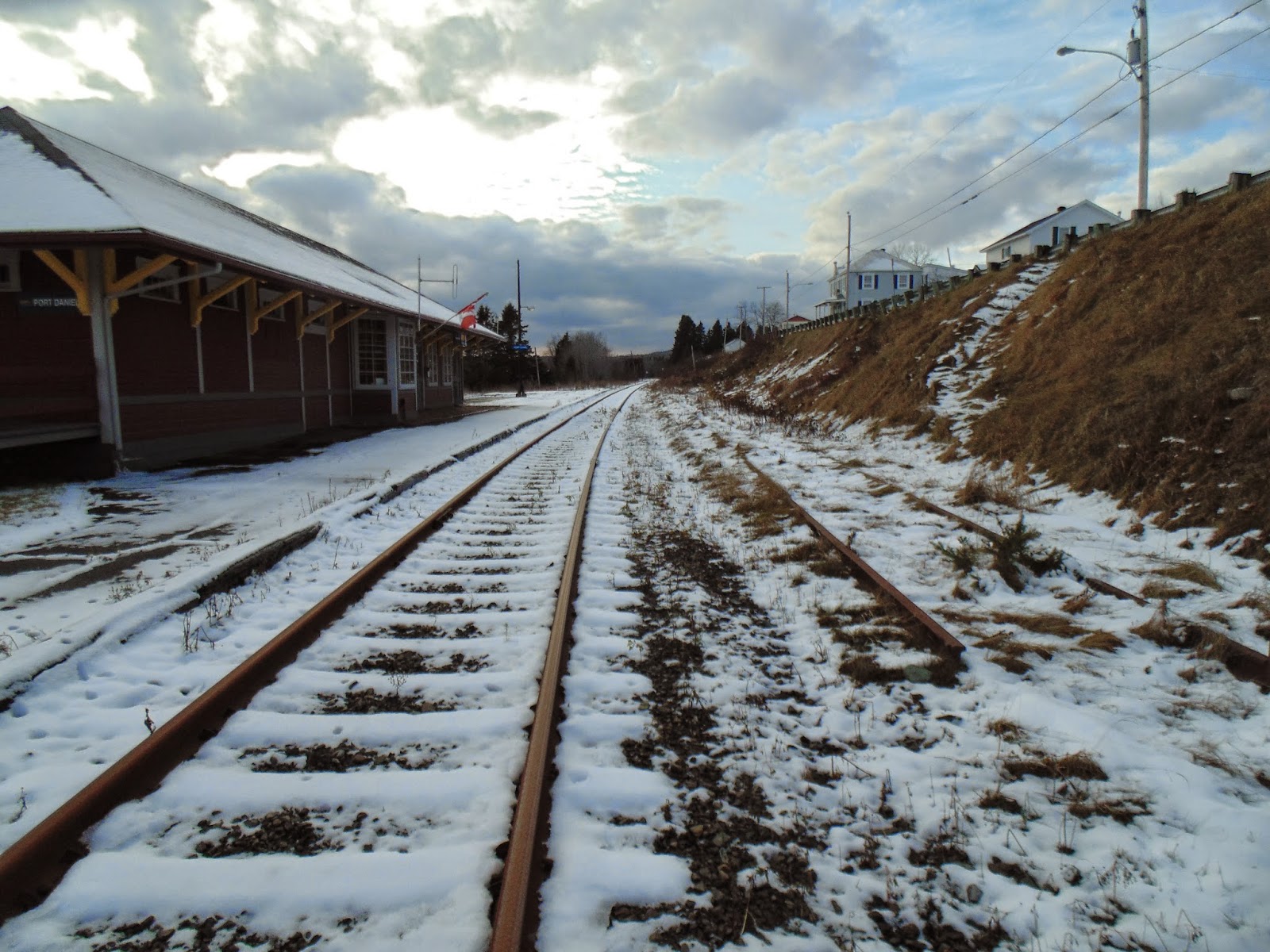 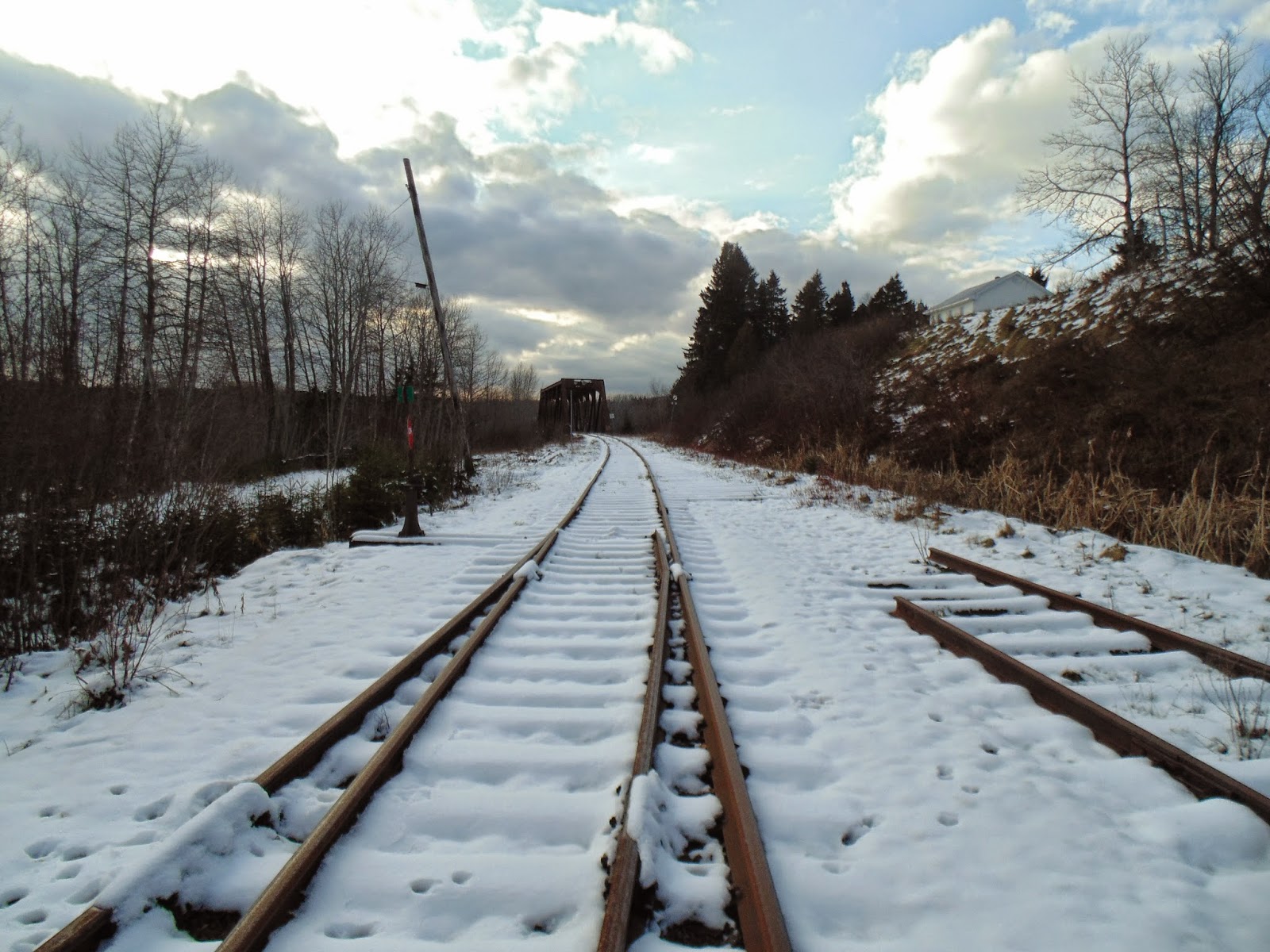 The location of the switch stand is clearly visible here. 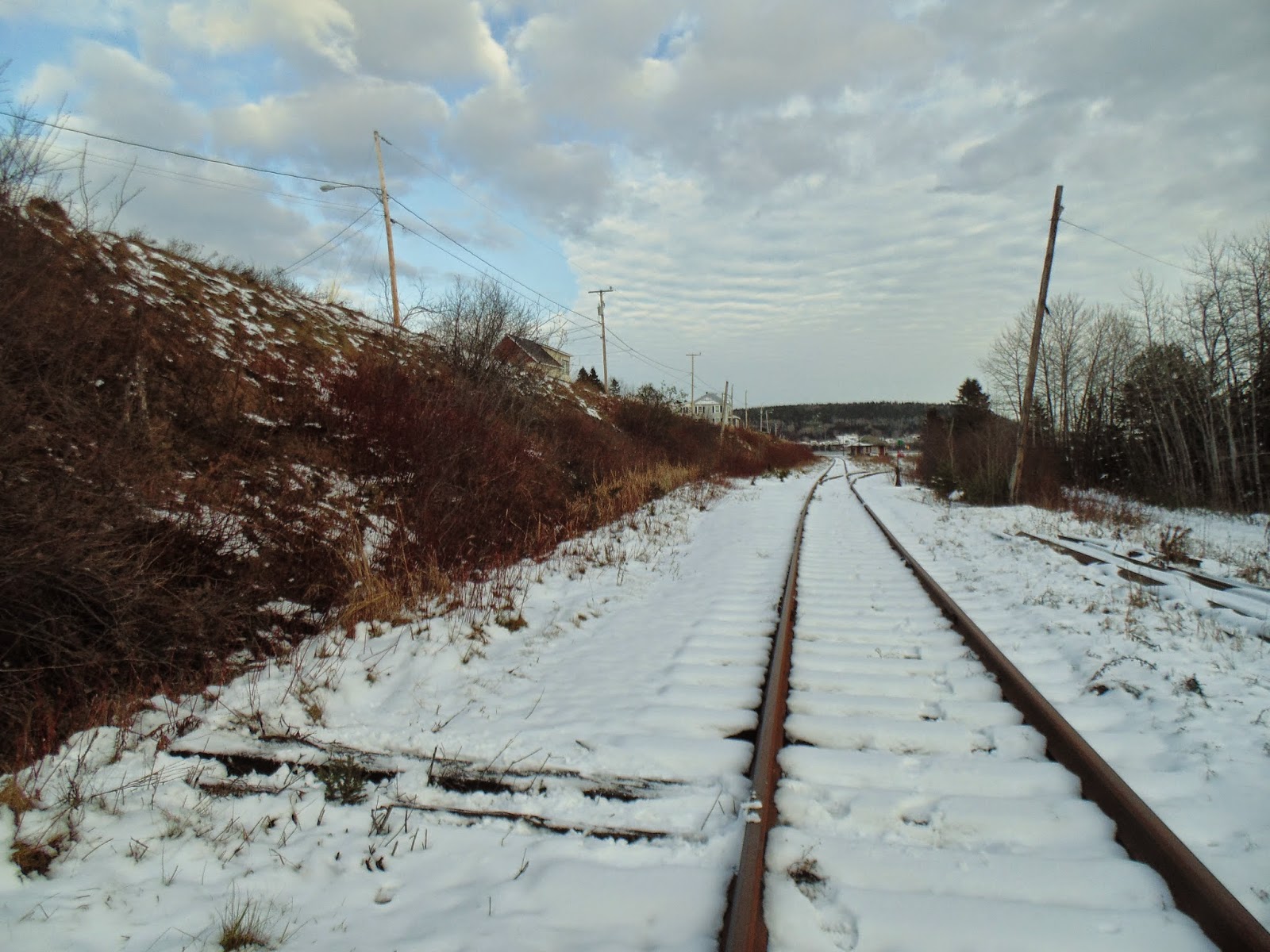 Here the west facing point into what I think is a team track is visible and still intact.  The switch stand also looks to be in operable condition.  Judging by the amount of vegetation, this track hasn't been used in some time, however, there aren't any saplings coming up through the sleepers either. 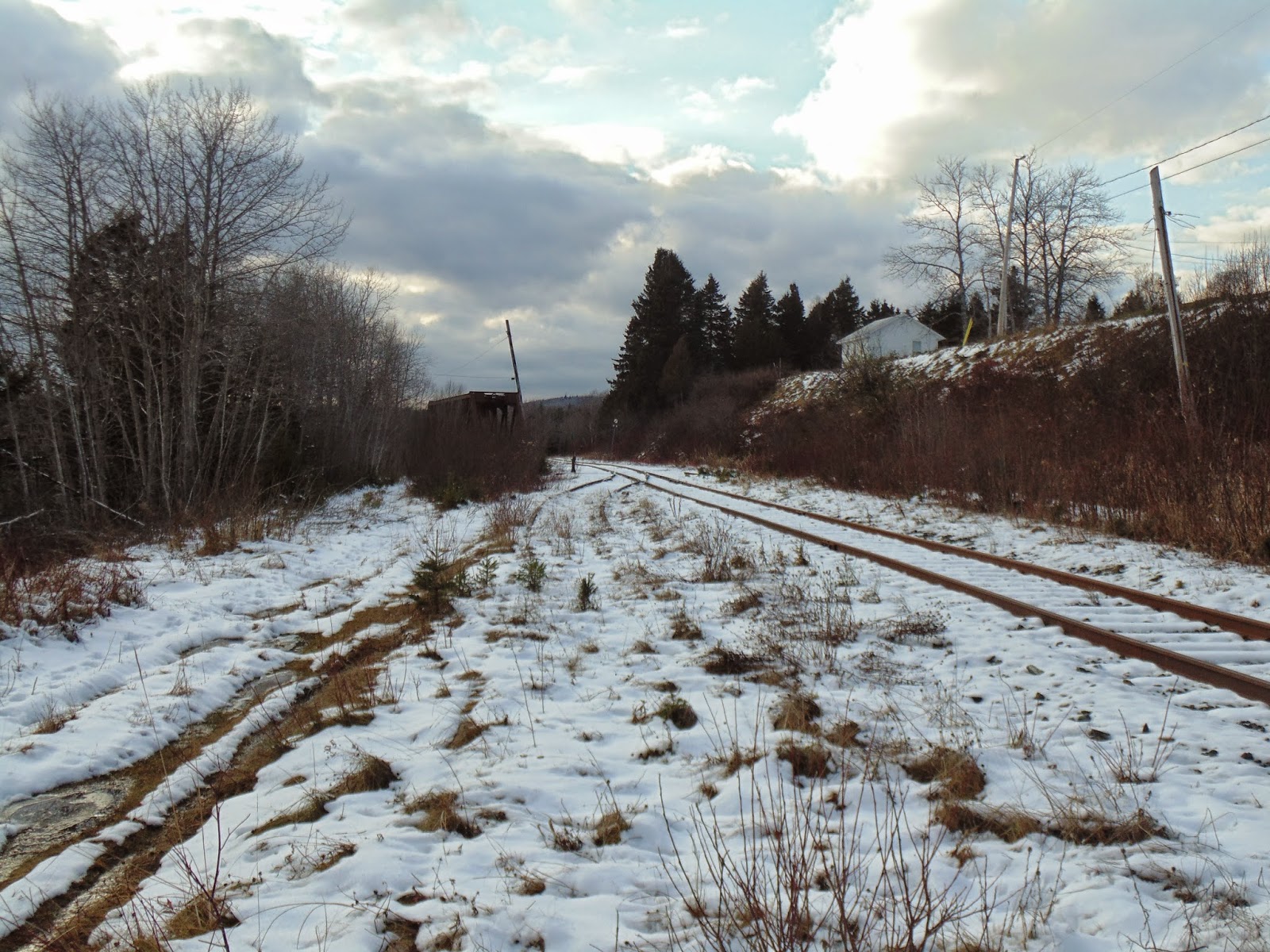 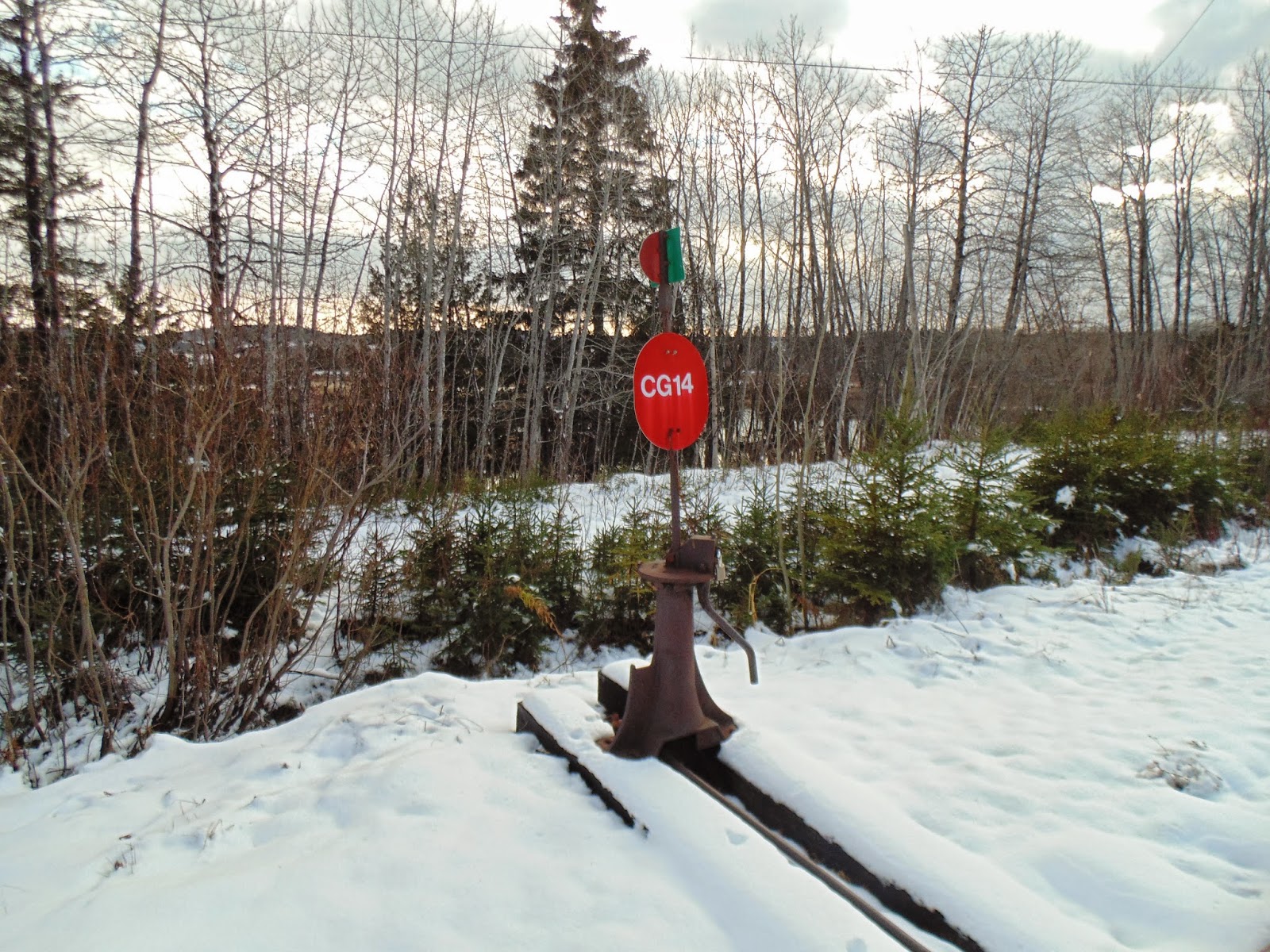 The team track runs back to a point about 75m from the station and stops. 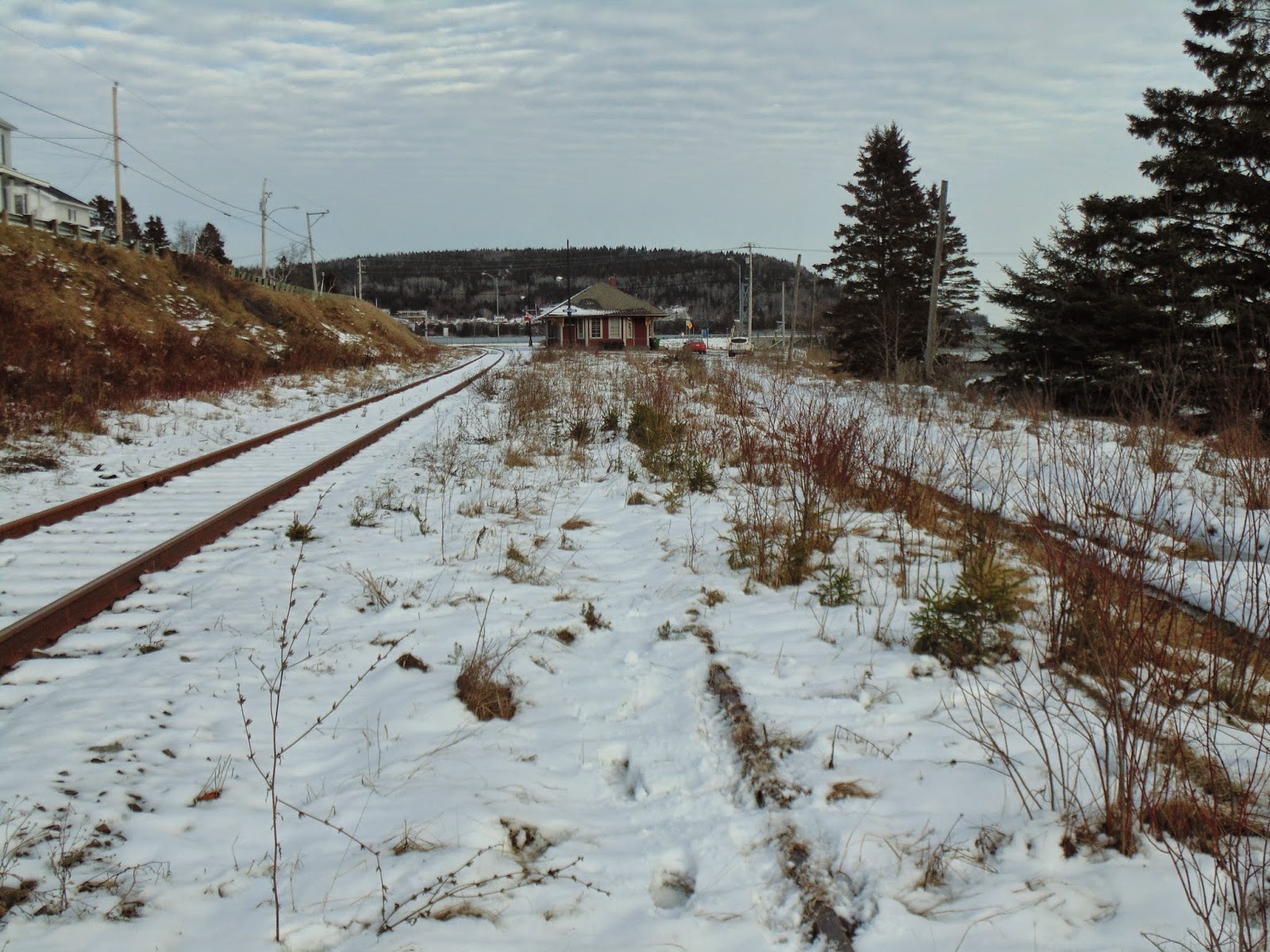 The wheel stops are barely visible through the weeds here. 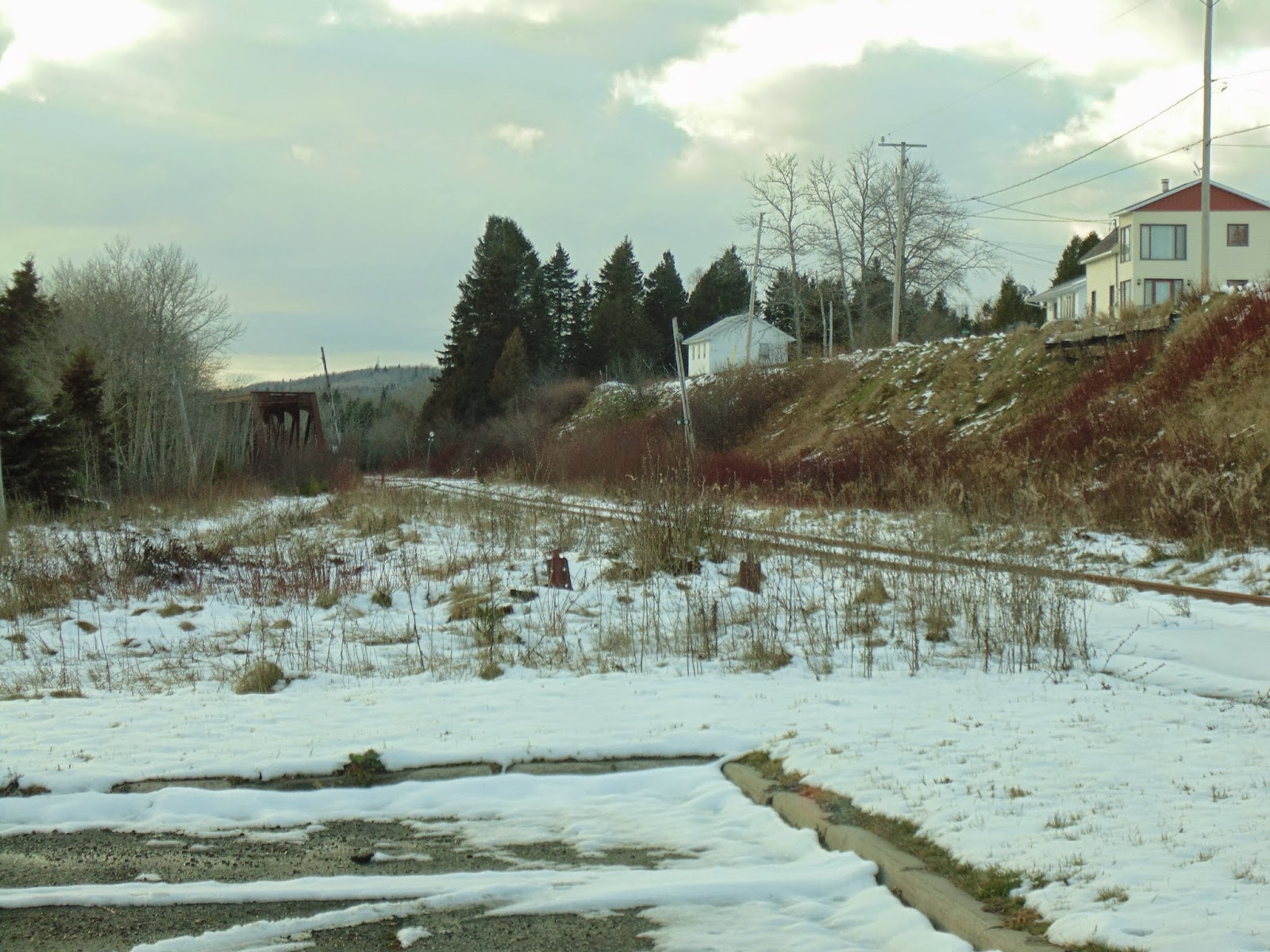 The following photos show the bridge spanning the Petite Port Daniel River.  It would have been built by the Quebec Oriental/ Atlantic Quebec and Western Railways and matches many other similar structures on the line, as well as surrounding Intercolonial Railway and National Transcontinental Railways in nearby New Brunswick and Nova Scotia. 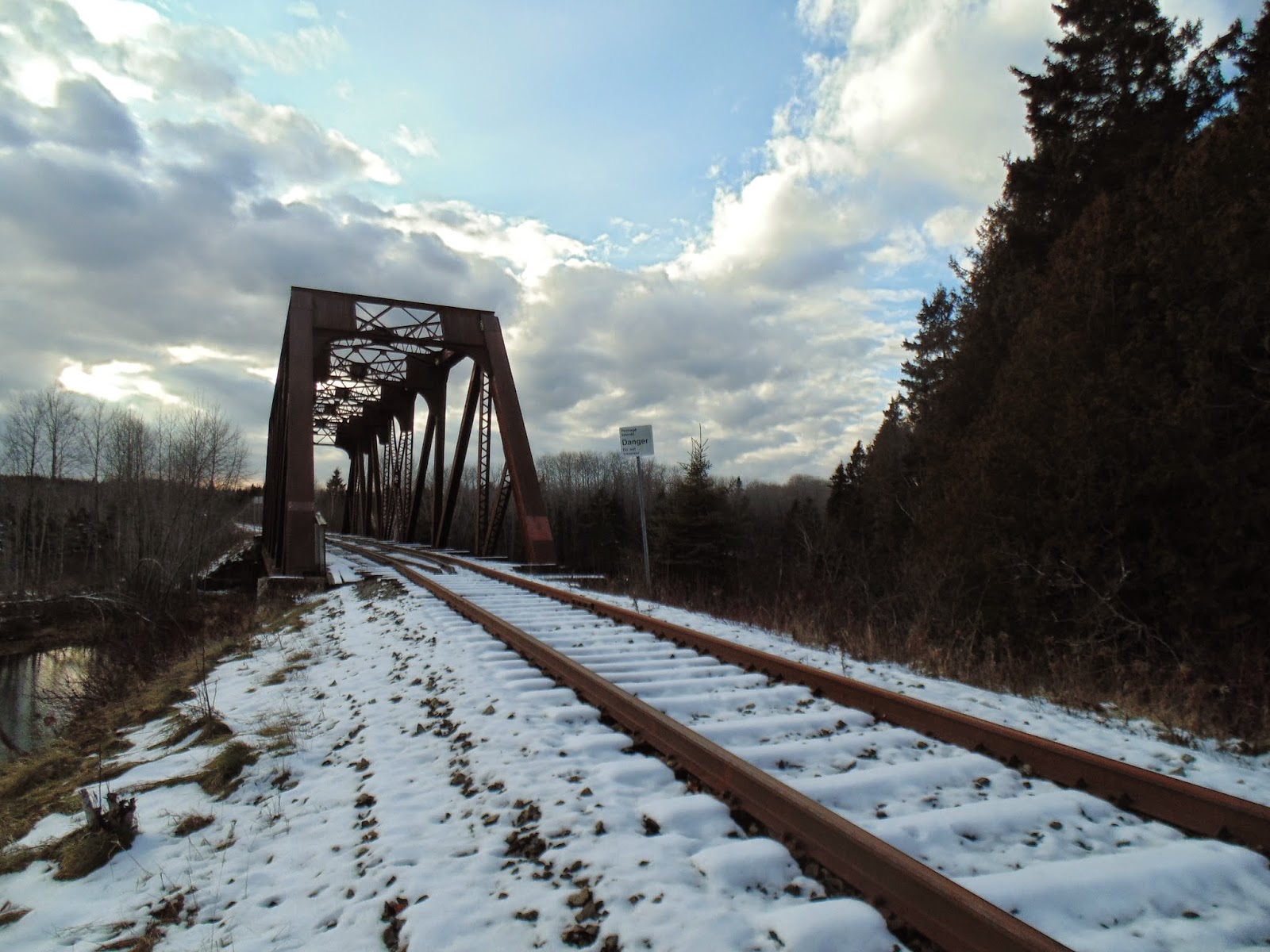 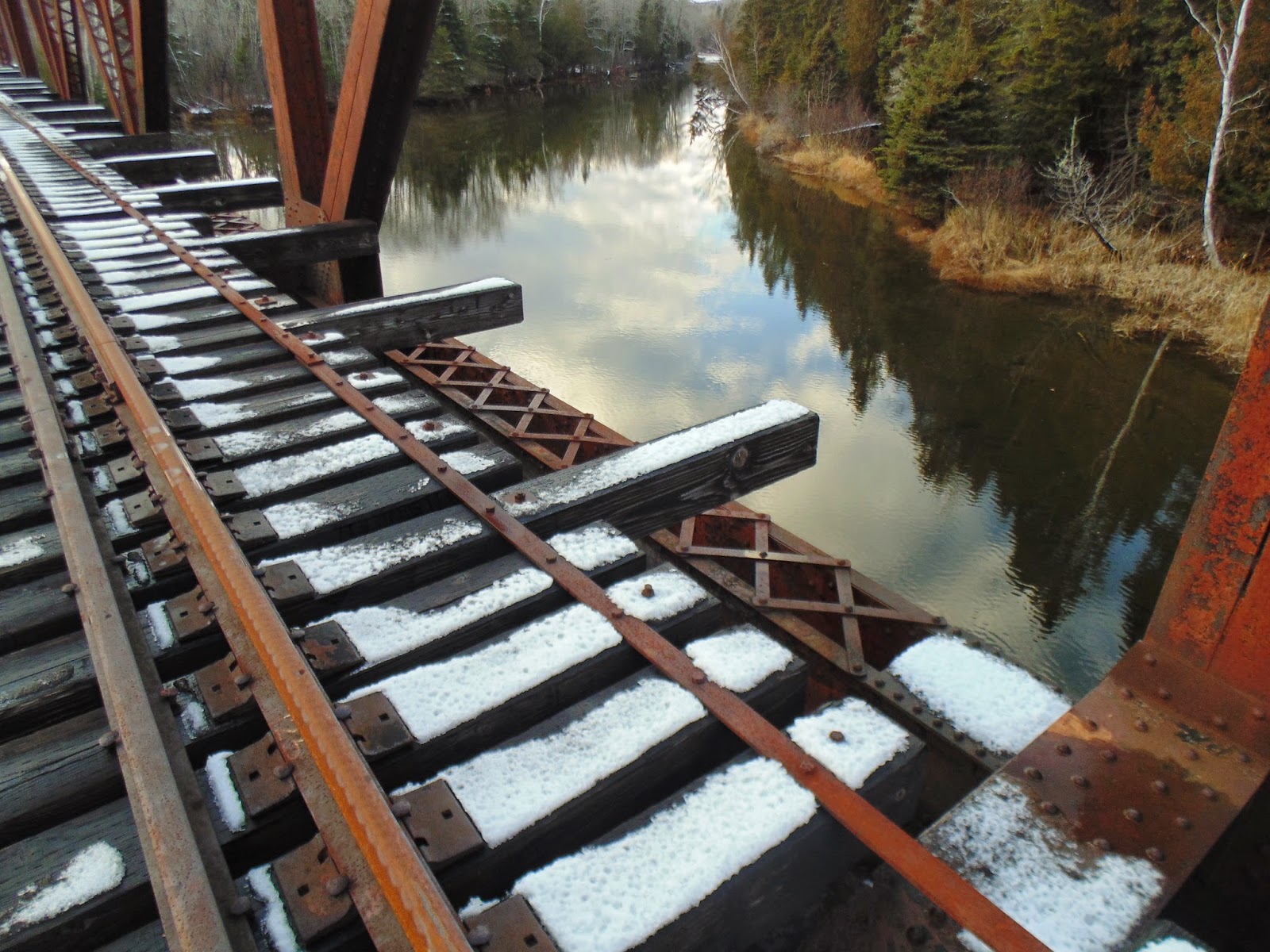 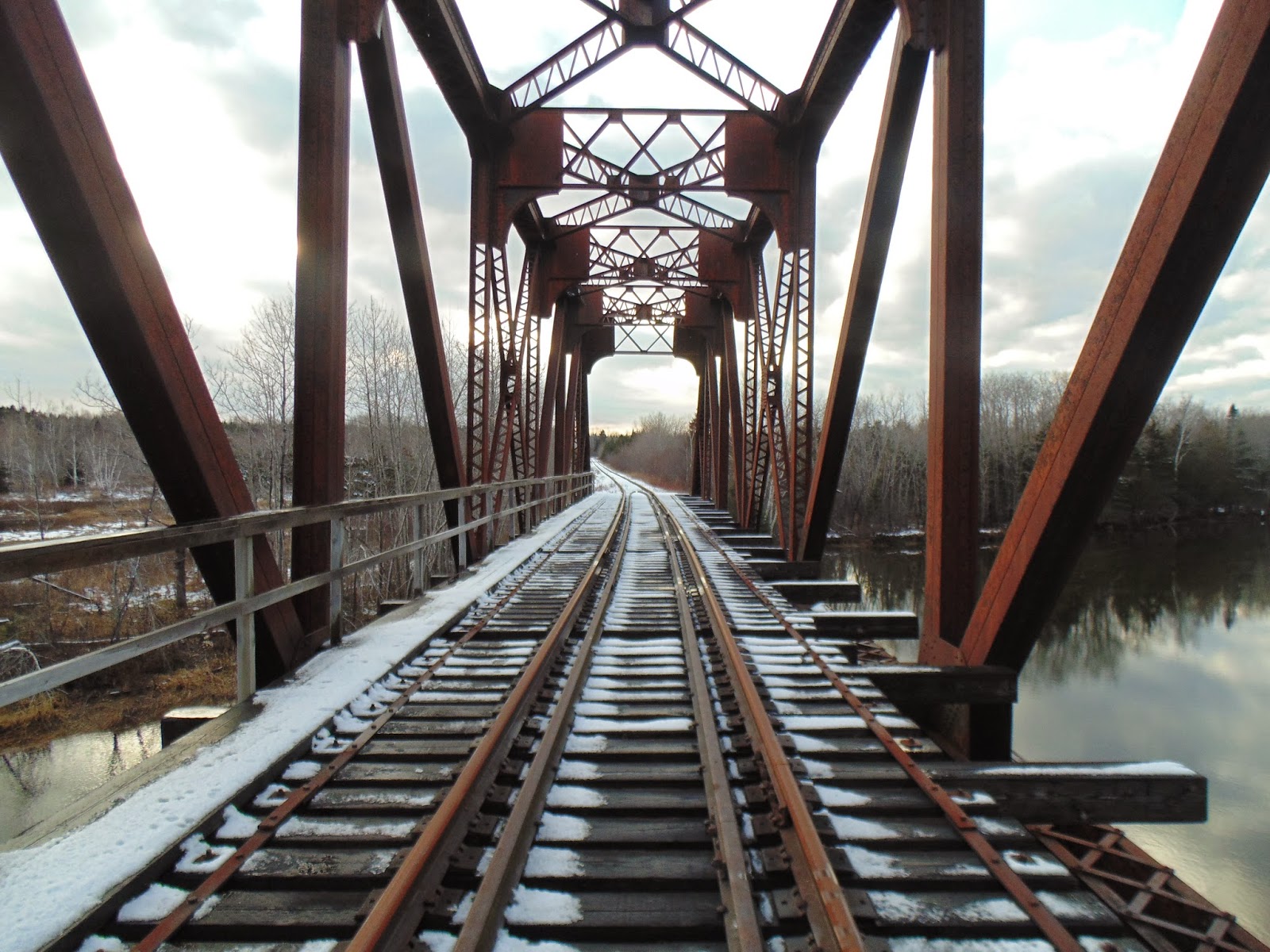 Below are photos of the bridge over the Grande Port Daniel River.  I have seen many wonderful photos of The Chaleur crossing this bridge, from many well respected railfans including Gary Knapp, Steve Boyko, David Morris and quite possibly Bill Linely as well. 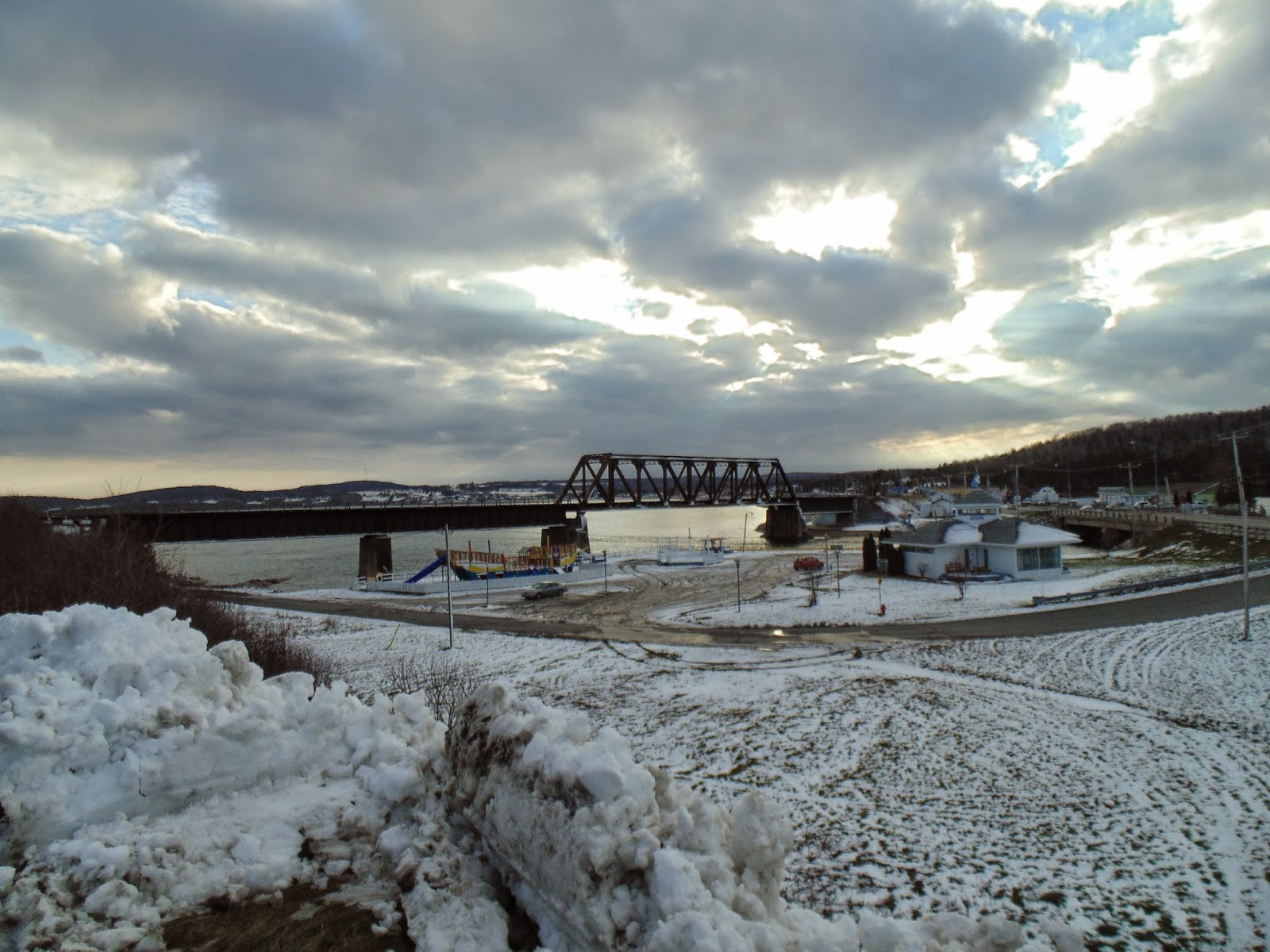 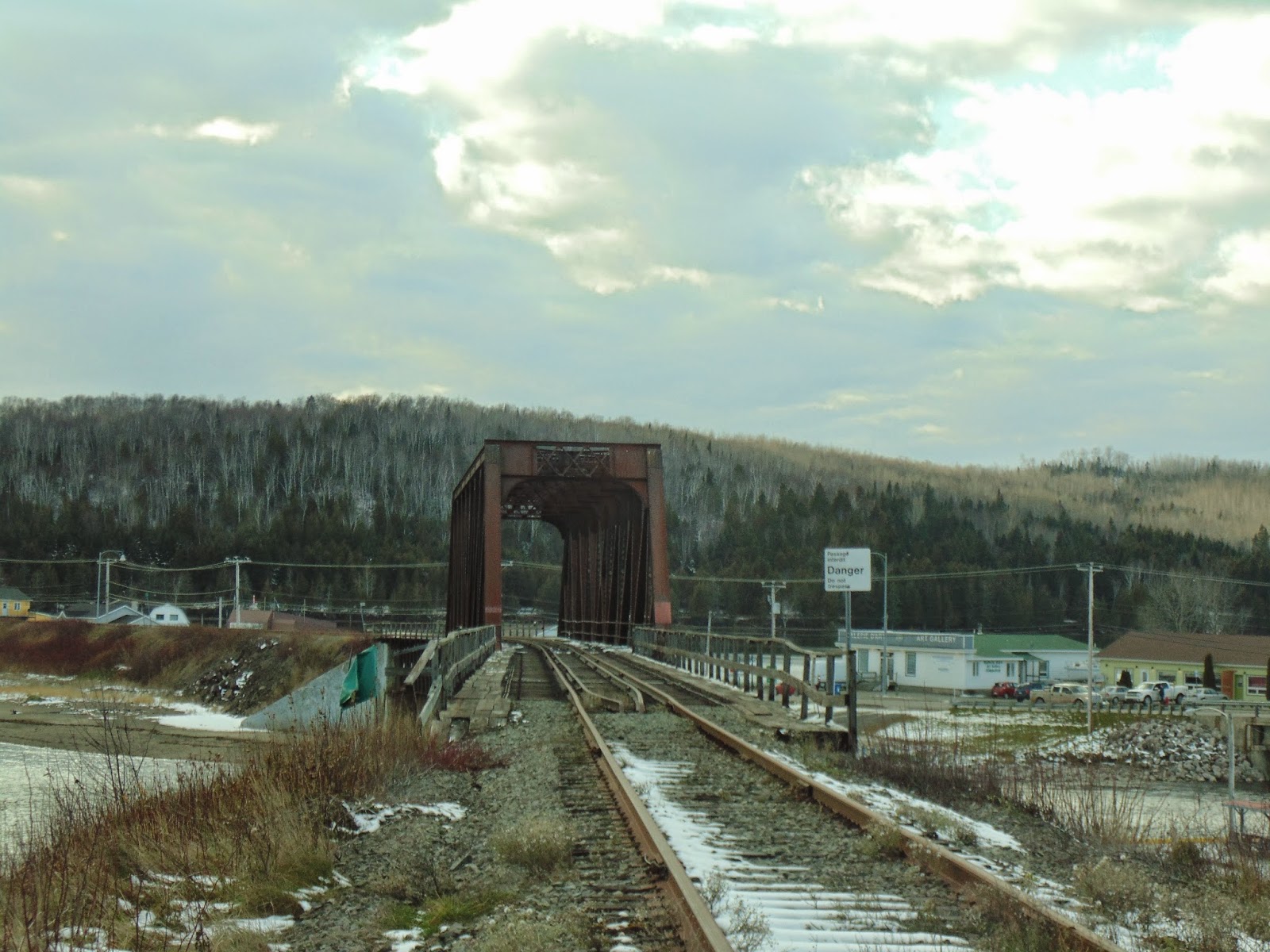 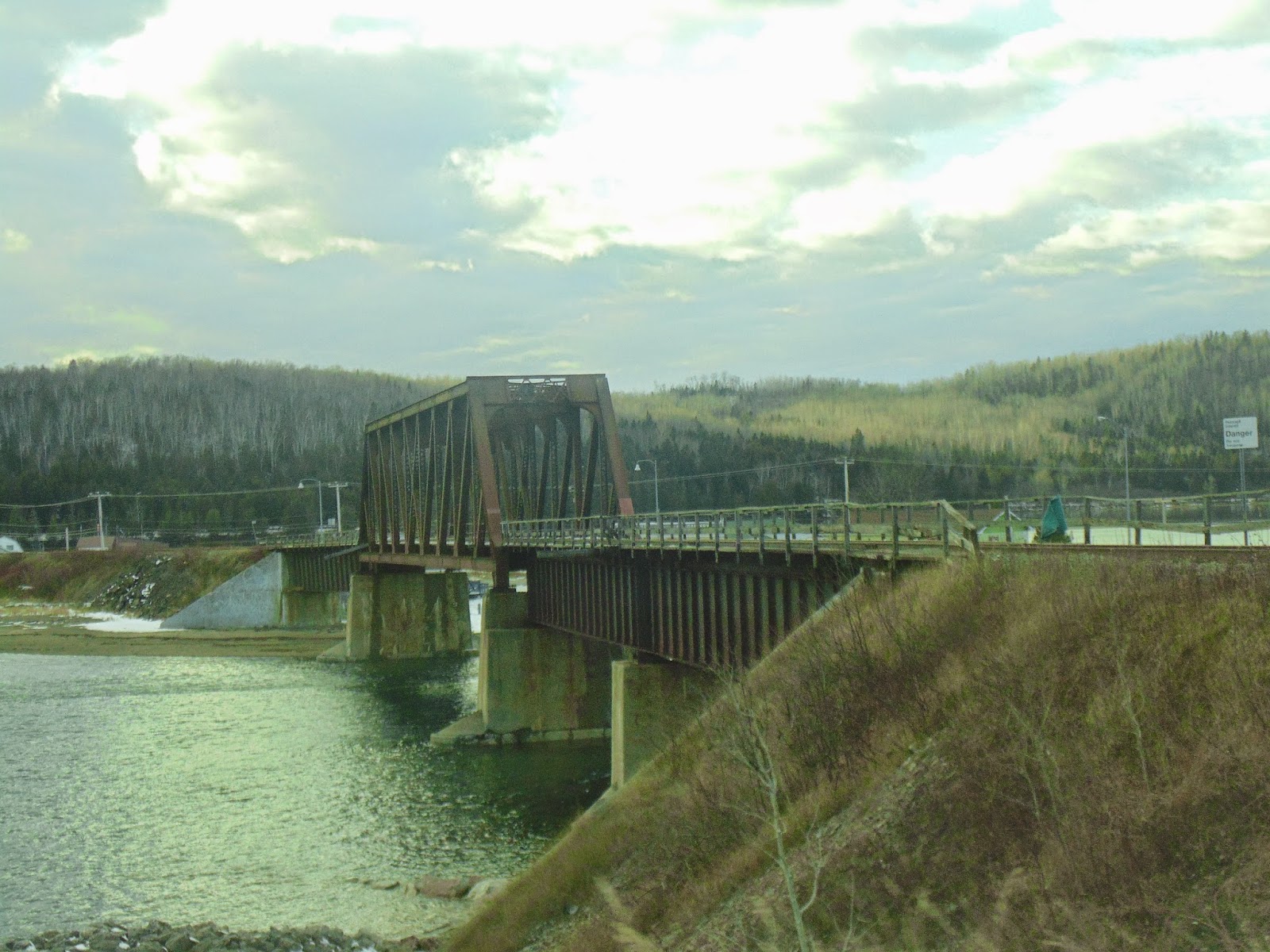 This photo shows the hillside which the tunnel cuts through.  When faced with tapping the line through, the engineers couldn't go in behind this area as the land only gets steeper and they couldn't go around it on the water side as there is no land there.  The only solution was to go through.  The tunnel was built in 1908. 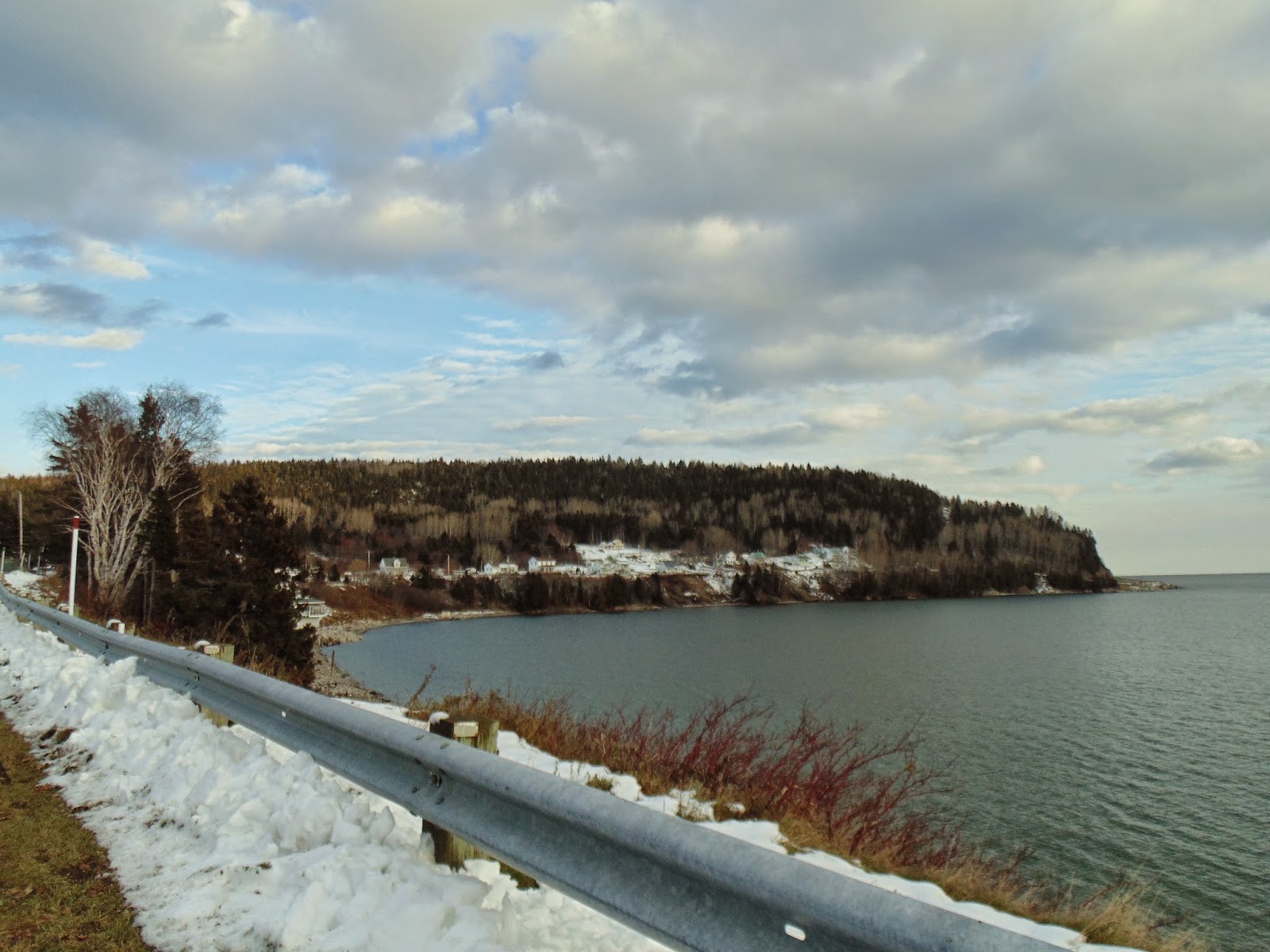 The following photos are of the west facing portal.  Note the restricted clearance sign (yellow) above the danger sign. 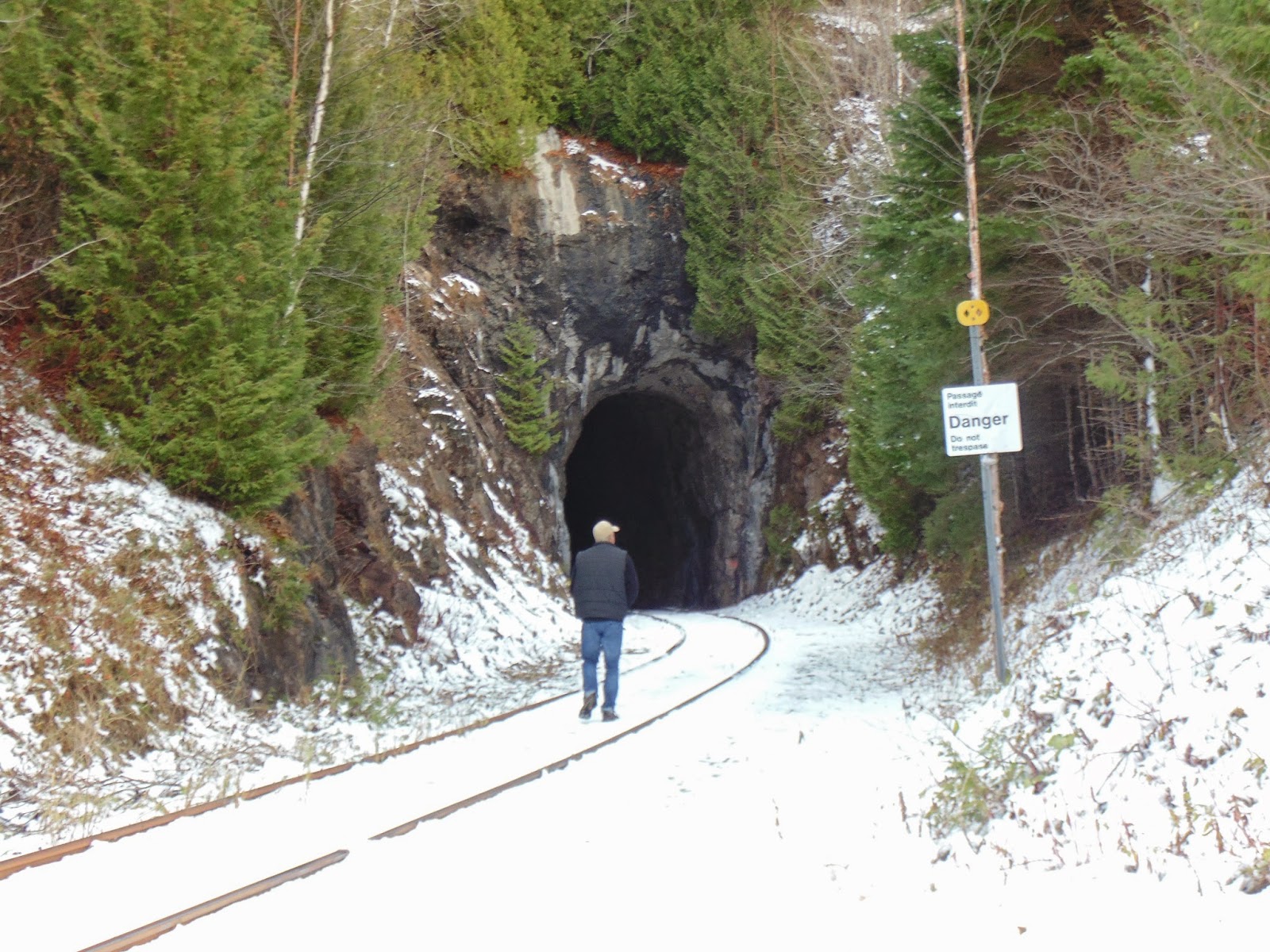 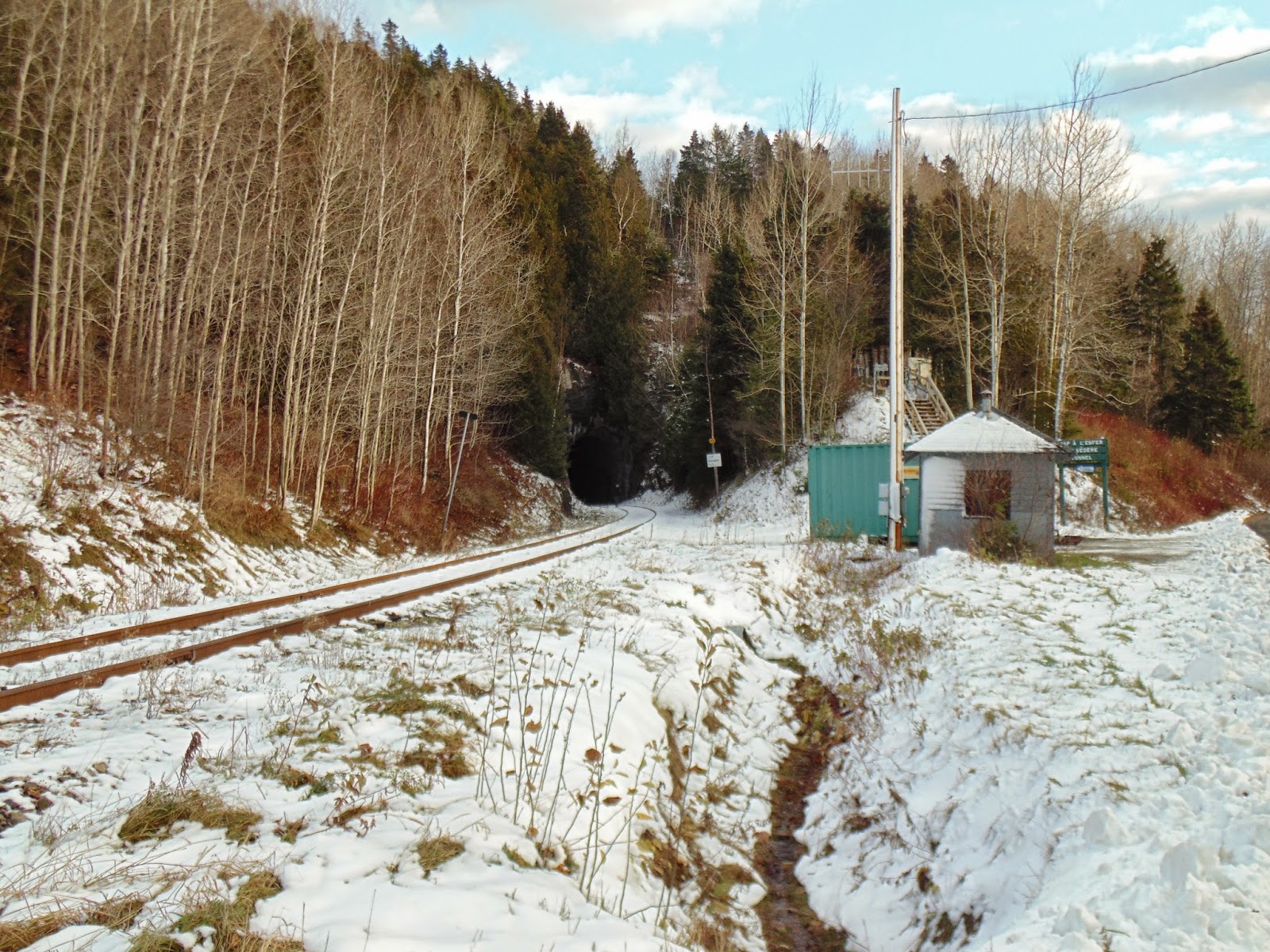 This neat little section building looks like it has been here for a few years. 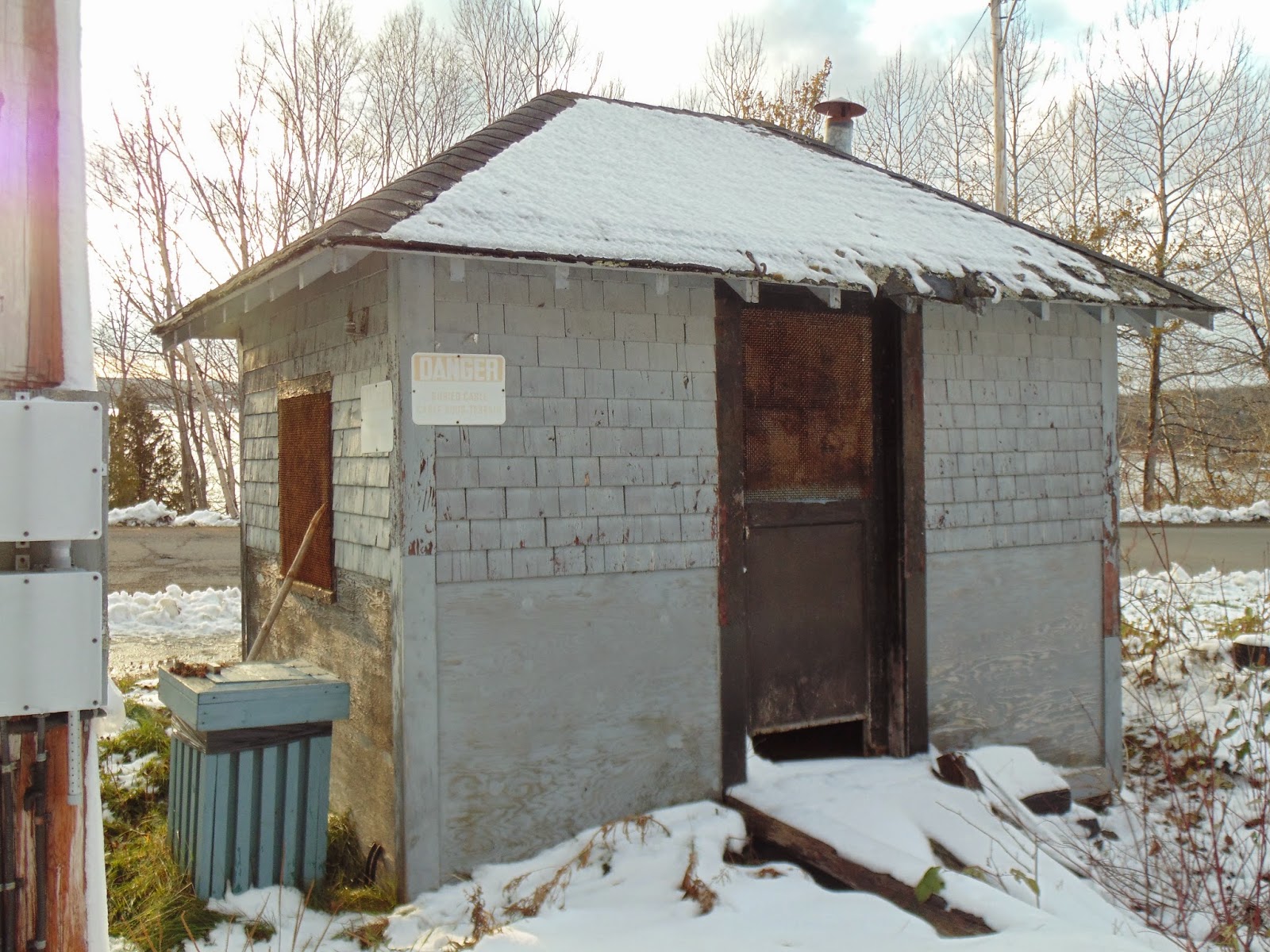 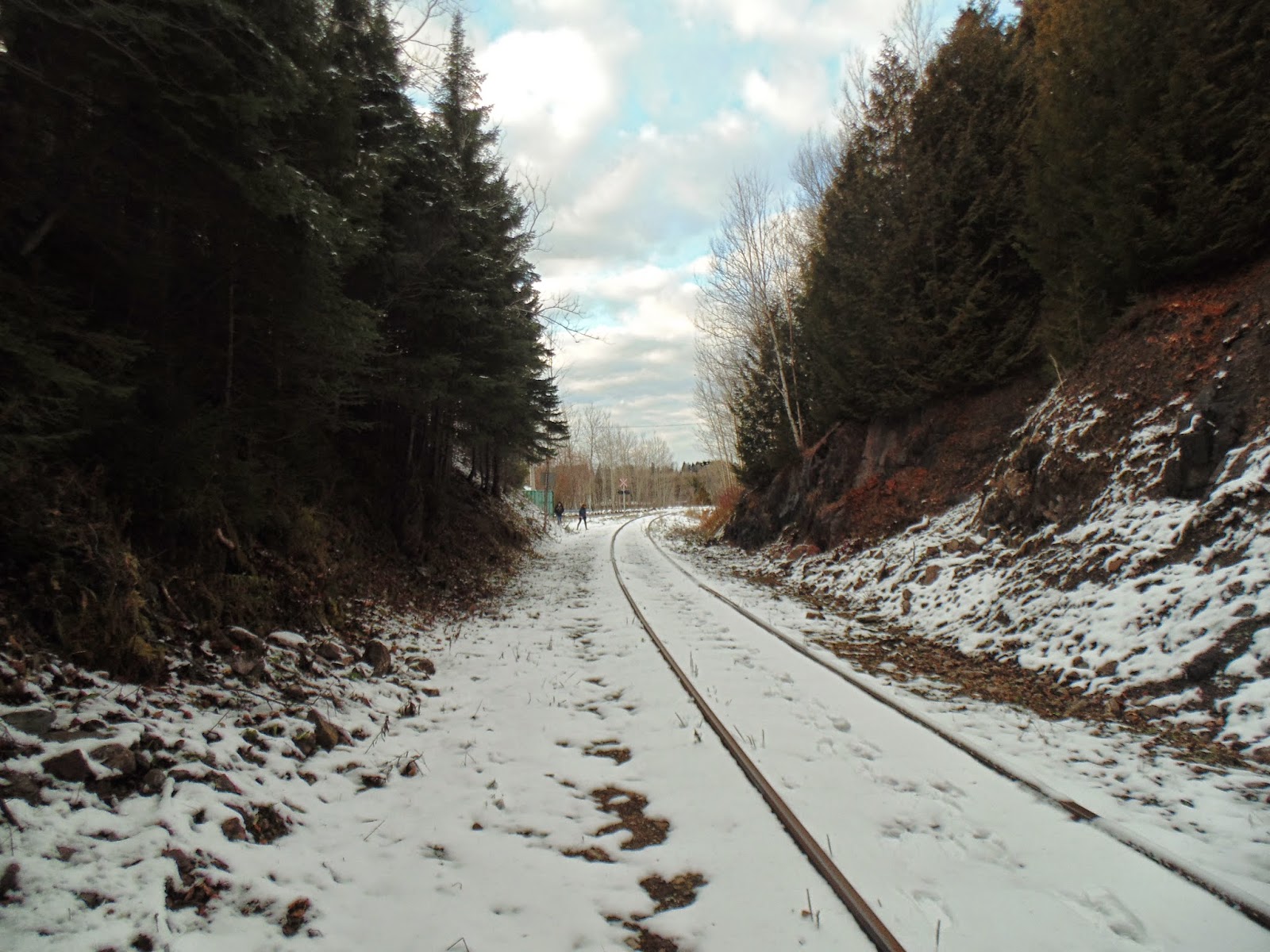 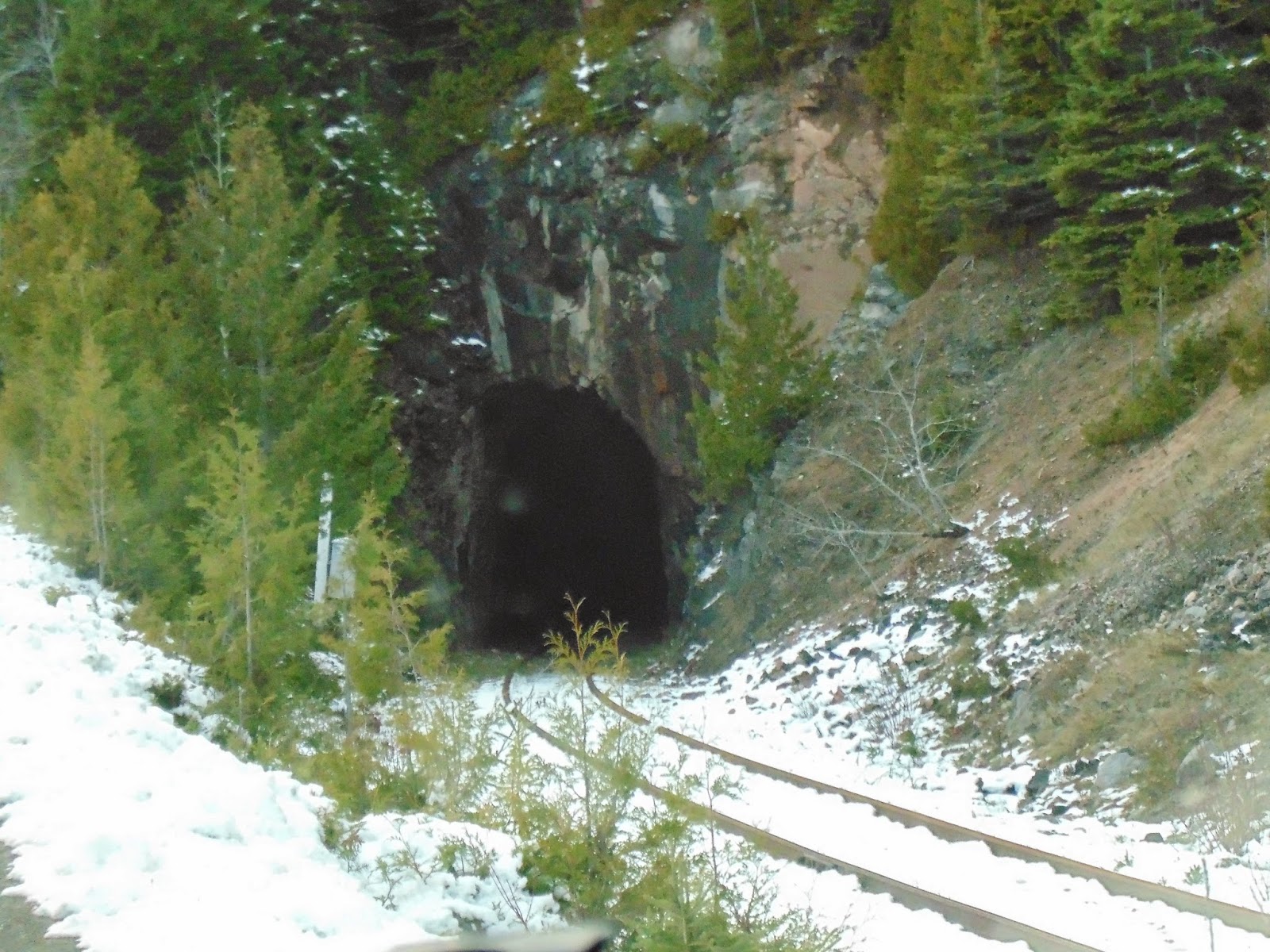