The SD40-2(W) is from an old unpowered Athearn Blue Box kit.  Traditionally, I'm not a big fan of the Blue Box or Athearn Ready to Run lines, which in turn have steered me away from the Genesis line, but as far as kitbashing, these Blue Boxes are great.  The paint is easy to remove, they are mostly a generic design and there are many compatible detail parts available for them.  I picked this one up on ebay for $30, shipping in.  The guy told me he too was originally trying to build a -2(W) but he lost interest as it was one of his first builds.  The cab was a Detail Associates job.  I tried to salvage it but it was too far gone.  Most of the Bondo came off the shell when I stripped the paint.  Here's what it looked like the day I got it. 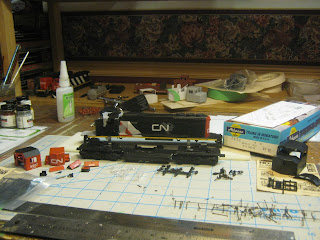 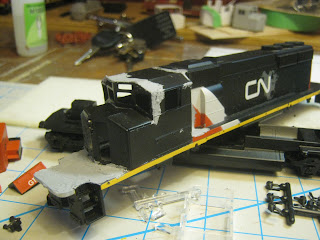 I plan to model 5245, class GF-30N in the zebra stripes paint.  The cab that I am using is a long out of production Canadian Prototype Replicas GMDD Wide Cab kit from a guy on the Diesel Detailer.  Last week I was also able to track down a powered frame from another member on the DD for next to nothing so this locomotive will be powered after all.

The SD40 on the other hand, is a first run undecorated Kato locomotive.  The reason I was specifically looking for a first run model, is the fact that is has the right trucks for a first generation, CN 5xxx GMDD SD40.  I haven't picked out a particular number yet, but it will be between 5008-5099.  I am leaning on painting it in the 1961 scheme, the one with the orange ends, black long/short hood and cab, and a large CN noodle on the long hood.  This one's all the way from England.  I bought it for $40, shipping in, from yet another member on the DD. He was also going to model a -2(W) (seems pretty popular eh?) but changed his mind as he's more of a Norfolk Southern guy.  I'm gonna stick to the standard cab on this one. 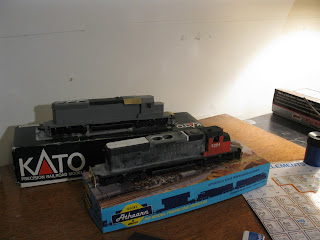 The nice part was that I was able to cut out the dynamic brake assembly from the Kato model and use it on the BB model, then stick the non dynamic hatch from the BB model on the Kato.  I've been fairly busy with my courses lately, so between that and waiting for my Miniatures by Eric / Cannon and Company parts to arrive I haven't made much progress.
Posted by Unknown at 18:27