My Layout at a Glance

Five years ago I was visiting my grandparents in Quebec.  My grandfather and one of my uncles had built a small layout in their basement back in the late 70's or early 80's.  After they tore it down (long before my time) my grandfather built an oak display case that mostly had a few engines and some rolling stock in it.  It had hung on the wall for years but this time I decided to ask him about them.  Long story short I winded up with plenty of rolling stock and engines, mostly by Life Like and Bachmann, but even some old Britsh OO Triang-Hornby stuff too.  I also got a dozen buildings and that was about it.  When I got it home I decided to build a layout, which was basically a circle on a 4'x8' sheet of plywood.  As time went on, I constantly changed everything until there were no rements of the original layout left.  I had no knowledge at the time and I eyeballed everything, from grades to turns, and I paid for it.  Most of the mainline corners were either 15" radius sectional track or eyeballed flex track.  As for the grades I really have no idea as they are changed now, but they were certainly more than 5%.

I had done little planning but there were a few things I knew I wanted for sure.  I wanted several bridges, a bit of a yard, some sort of industry for switching.  Most of all however, I wanted to loosely model Atlantic Canada, particurally the Gaspe region.  We have always had two or three hobby shops on the Island, but by this time they had long since stopped carrying anything related to model railroading.  I quickly learned two things: 1) scratchbuild what I can or use what is available locally and 2) mail order for the rest.  The idea of scratchbuilding has stuck with me ever since and my skills have come a long way. 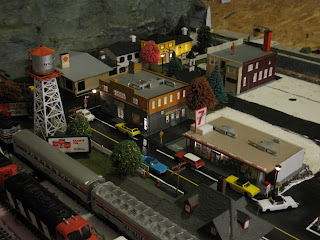 Hard to see in this shot but the CN F7's and Life Like Amtrak cars are actually sitting in my old yard, a three siding type of deal on a big slope. 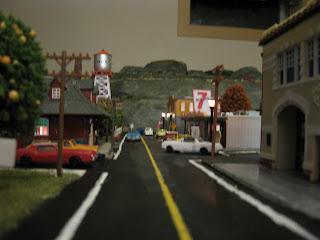 Looking north down what was Main Street.  The hand painted lines and cars that are no more than a crudely painted body on wheels certainly add to this shot. 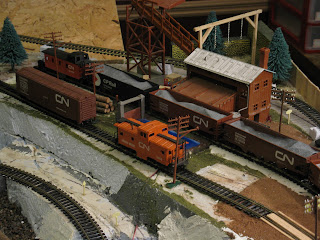 Here's an example of my early scratchbuilding and using what was available.  The ballast was sand with gray primer or small rocks added.  The hopper car loads were made from sand glued to stiff paper painted gray.

I worked on the scenery on and off for a few years, thinking that it would make up for the poor track standards...and boy was I wrong.  Overtime, I began to upgrade my locomotives and old cars and eventually, I ended up retiring all of them.  I now have quite a fleet of CN power, from the smoking MLW's to the old reliable GMDD's.

Late last summer I decided that I was going  bite the bullet and relay all the track.  I can now say that I am nearly finished, except for the yard leads and the track connecting the tall bridge to the rest of the mainline.  It runs much better now and I am beginning to see my work pay off. 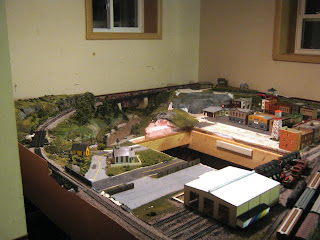 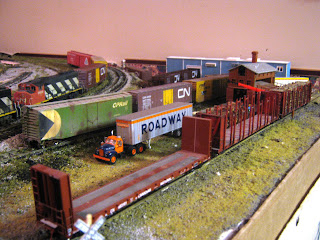 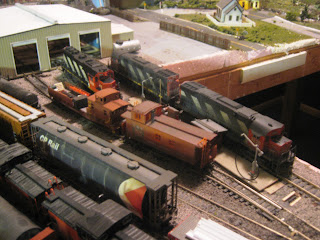 Engine Shops, fueling area and yard.  The weathering on the CP cylindrical hopper was one of my first attempts, and its to be touched up eventually. 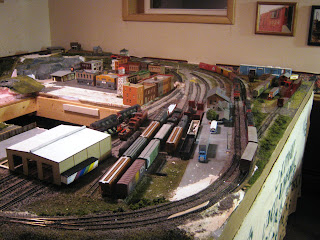 Overview of the yard, shops and station.  The hole in the middle is so I can reach all areas and is usually covered. 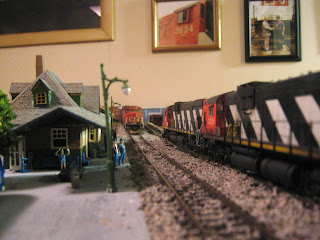 Head on meet at Bedfore Station between two pairs of GMDD GP40-2(W)'s and MLW C630M's.
To sum it all up, it certainly isn't big, and I really wish it was a shelf/walkaround type layout but this is what came out of the limited space and student budget I have.  As I post more, I'll talk about the locomotives, weathering, scratchbuilding and especially lessons I've learned!