When Bowser announced a run of C630M`s in HO it wasn`t long before I had my name down on the waiting list.  When these engines finally arrived in the mailbox nearly two years later I knew I was looking at my favorite engines.   Not only do they look good but they run great too!  They pull a lot, run quiet and required little change.

CN ordered 44 of the C630M`s from MLW in 1967-68.  They were numbered 2000-2043.  2000-2002 were classified as MR-30a with the remaining 42 units falling into the MR-30b designation.  In 1969 the units were switched from MR-MF, with the "R" designating a road switcher and the "F" signifying a freight locomotive.  The main difference between the two was that the first two units were equipped with dynamic brakes while the others were not.  These "Big M's" were launched under the "Century" line and were similar in design to the ALCO C630.  They rode on Canadian made Dofasco trucks, output 3000HP and featured a V-16, 251E prime mover under the hood.   (http://cnlines.ca/)


Here are my weathered and detailed versions of these brutes: 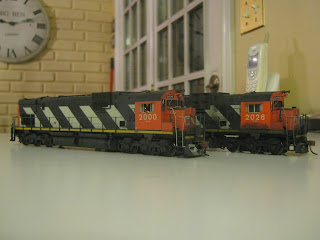 The weathering is a custom mix of acrylic paints.  2026 is more heavily weathered that 2000. 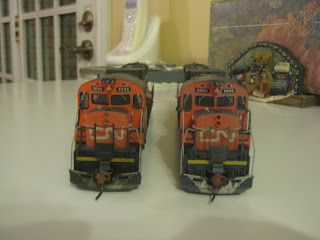 The Bowser model, had a third class light above the numberboards, which is correct for other roads but not CN.  I had to file them off, fill the holes and paint the spots.  A little weathering hides any trace.  The horn also had to be painted black. 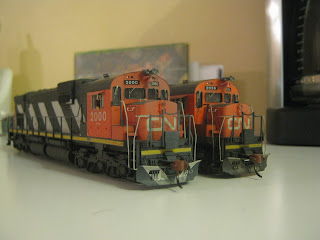 The only complaint I have with these models are the thin handrails and a few "bends" can be seen. 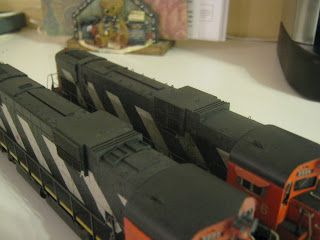 As mentioned earlier, 2026 didn't have dynamic brakes, so those had to go.  I decided to add the as delivered air filter cover to 2000.  It almost seems wrong to cover those cool square filters CN added but it had to be done to one of the two.  The parts came with the locomotives. 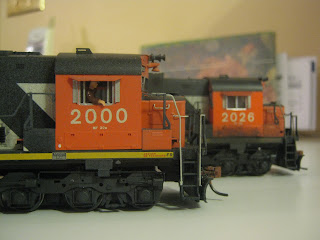 I decided to open 2000's cab windows and place an engineman and conductor on either side.  I guess you could say that's L.K. Main in the engineer's seat.  These happened to be one of his favorite locomotives to operate.


I didn't take any photos of the conductors side for some reason, but handbrake chains were added on the front trucks along with a pair of rerailers behind the cab on the walkway.

All in all I really like these units.  They really added to my existing MLW and GMDD fleet.
Posted by Unknown at 17:46