We are very fortunate here in the Maritimes to have such a great crowd of model railroaders.  Furthermore, the talent amongst many of these guys is second to none.  One place where we all get a chance to meet up and shoot the breeze is at train shows.  Our PEI group tends to go to three shows - the Moncton Show (Easter Weekend), the MFMR Convention (in May) and the Truro Show (mid October).  These shows are always a good time and there is usually a good assortment of guys from PEI, NS and NB.

One of the coolest things about these shows to me is the UMG group.  The UMG, or Unnamed Modular Group, is a small collection of guys throughout the Maritimes who built free-mo modules and take them to the shows, notably Moncton and Truro.  I've had the pleasure of being involved with these operations twice now, both at Truro, as I've never been to the Moncton show.  Fortunately, I knew several of the NS guys from the internet prior to becoming involved with the UMG.  This fall I decided to build a set of modules that I could bring to the show.  It was obvious to me that they were going to be Quebec themed.  I tossed a few ideas around in my head before settling on the final plan. These included the following, along with the reasons in which I turned them down:

Chandler - this would feature the pulp mill.  I decided that this would be too hard to model accurately due to the wharf and the fact that the town is set of an S curve.  NB member Ronald Grandmaison already has a set of pulp mill modules so I didn't want to fill the UMG with pulp mills.

Nouvelle West - this was my most likely plan for a while.  After seeing PEI member Ed Cooke's set of modules consisting of a couple transload tracks, a main and a passing siding, I quickly began to envision how well Nouvelle West and the Temrex sawmill would fit that same track plan.  I was sold on this idea for the longest time and even started to draw up plans until the last and final option came along.

Matapedia - Ok, I actually owe all the credit to Chris Mears on this one.  He and I were driving to ops night a few months back and the conversation drifted to my modules when he asked why I hadn't considered Matapedia.  I had never even given this one an honest thought up until this point but it made perfect sense to incorporate a wye into the UMG setup.  Furthermore, this fit my Gaspe criteria perfectly.  The only stumbling point for me is that I have never been west of Cross Point (Matapedia sits about 22km west of Cross Point) so I am working off of other people's photos as well as aerials.

Historically, the UMG consisted of what was essentially a box shape.  PEI member on hiatus Greg MacQuarrie had built a set of wye modules but I have never seen them in use.  Last fall, NS member Ric Hamilton showed up (albeit four hours late on Friday Night) with a diamond module which Will and I quickly dubbed "Conjunction Junction".  Seeing the Conjunction Junction modules, as well as a couple of wye modules down in Springfield really showed me that it is possible to model wyes in a relatively small amount of space.

Matapedia itself was never anything more than a junction on the on the ICR.  The town itself is very small and is nestled at the confluence of two famous salmon rivers, the Matapedia and the Restigouche, the latter of which forming the NB-PQ border, as well as being the base of the Bay of Chaleur at this point.  From Matapedia, the Mont Joli Sub runs to the west, whereas the Newcastle and Cascapedia subs run north-east, towards Campbellton and New Carlisle, respectfully.  The wye is just east of the station and the ICR bridge over the Restigouche forms one leg of the wye.

Basically, CN 592/593 would run in and out of Campbellton, taking the east leg of the wye onto the Cascapedia Sub.  The neat part about Matapedia was the interechange between VIA 118/119 and VIA 14/15, otherwise known as The Chaleur and The Ocean. The Ocean would arrive on the station track whereas The Chaleur would park on the track behind the station which connects to the wye.  From there, passengers and cars would be swapped out and the two trains would continue on their way.  This practice continued right up until 2012 when The Chaleur was suddenly suspended indefinitely.   Fast forward to the last two weeks, when I finally began working on my modules.  I decided on a set of four modules, three in line and one forming the third leg of the wye.

Fast forward to tonight, and the progress I have made on the modules.  Everything is wired other than the wye module and everything runs well, no derailments, and no shorts thus far.  I am a little worries about wiring the wye, as one leg must be isolated and I have to install a polarity reverser - something I hope to finish tomorrow night and test this weekend. 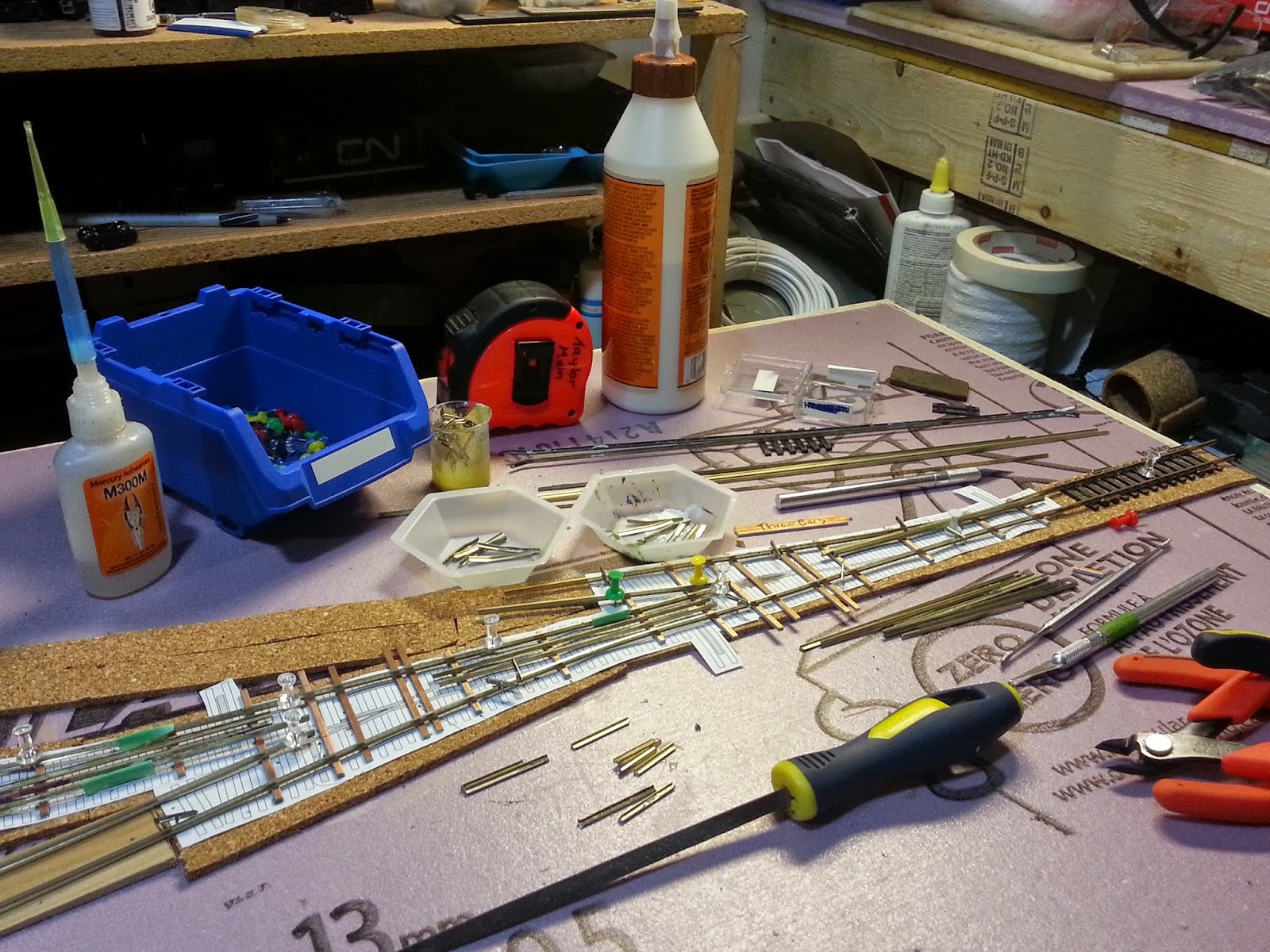 The UMG standard states that the mainline must be Code 100 rail and that it must be centered withing the 2' x 4' module that joins with other modules.  I opted to hand-lay all the switches, both for the cost savings and the far better operation.  The sleepers are a combination of Fast Tracks PC board ties (to solder the rail to) and scale white pine ties from Albert Scale Lumber. Fast Tracks printable templates were used to build the switches on. 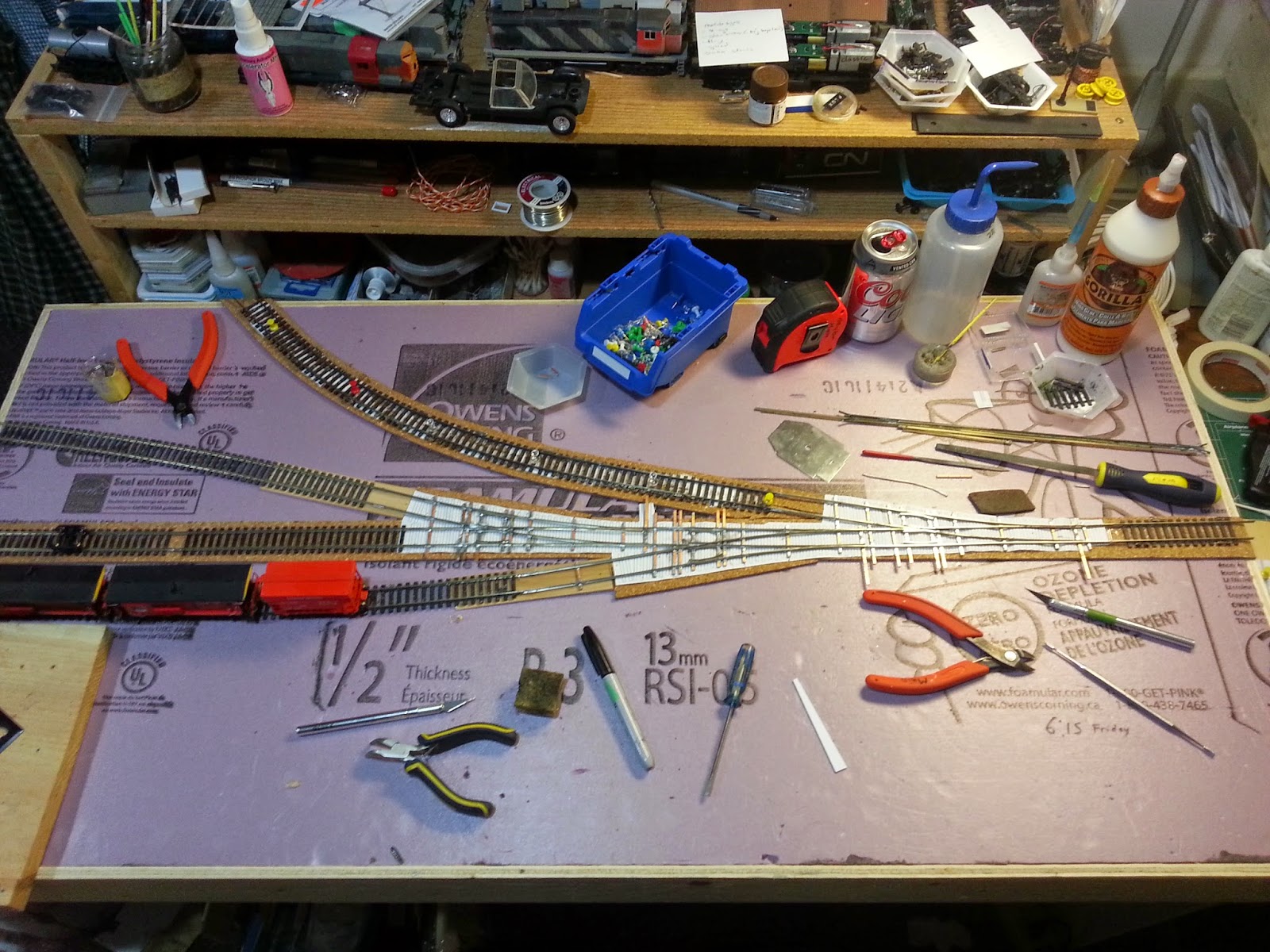 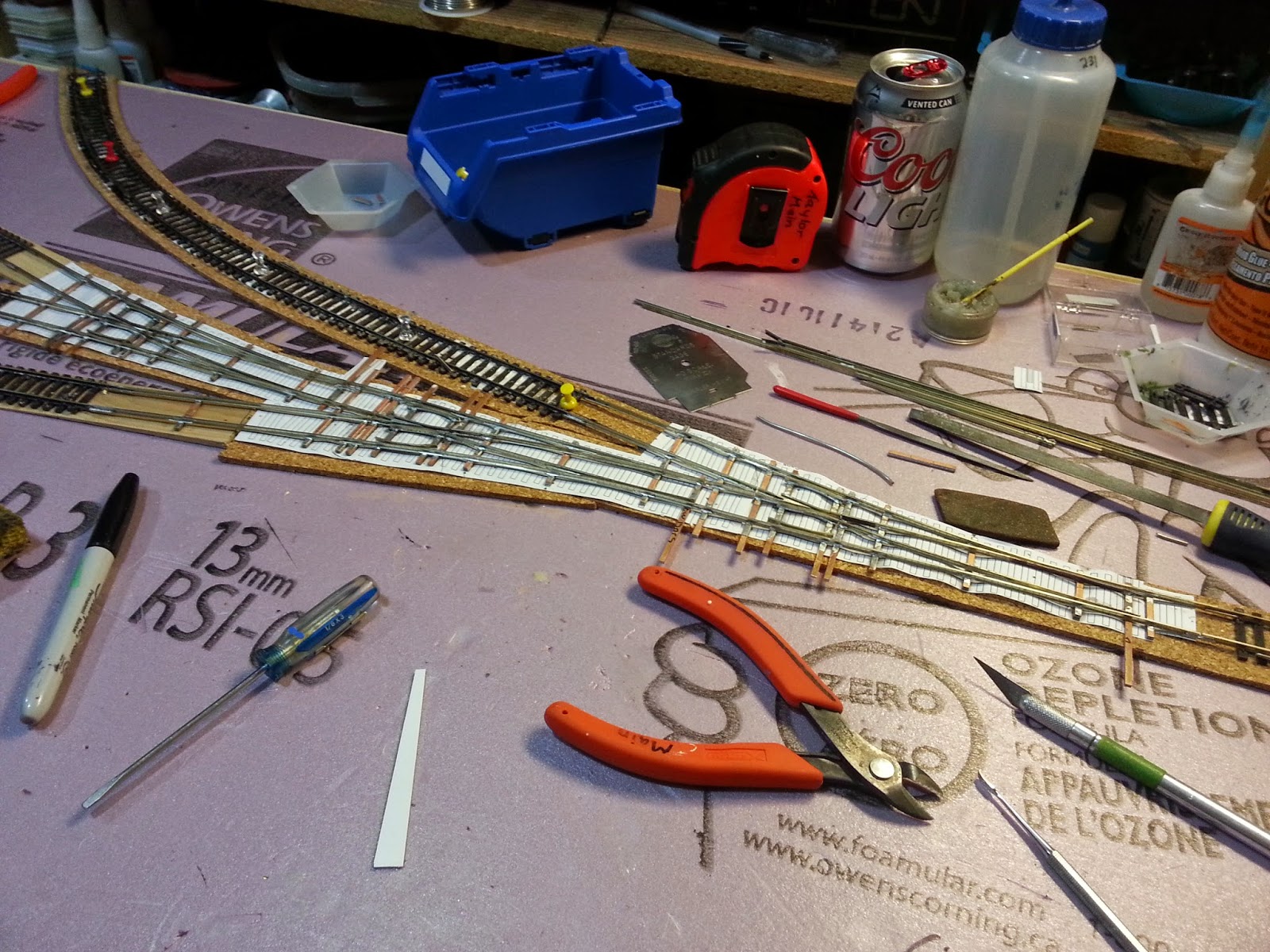 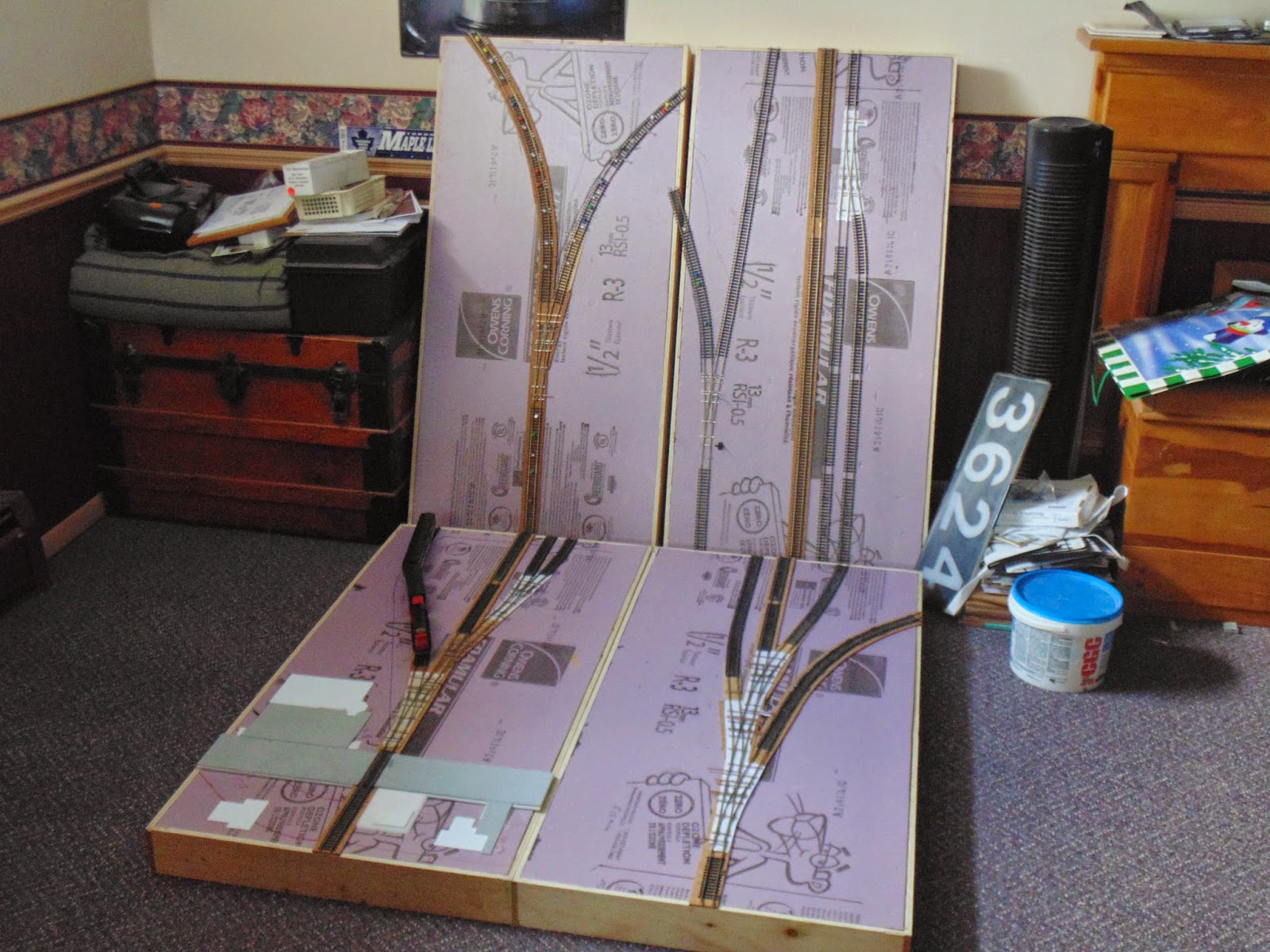 Here all of the track is laid and secured to the modules. 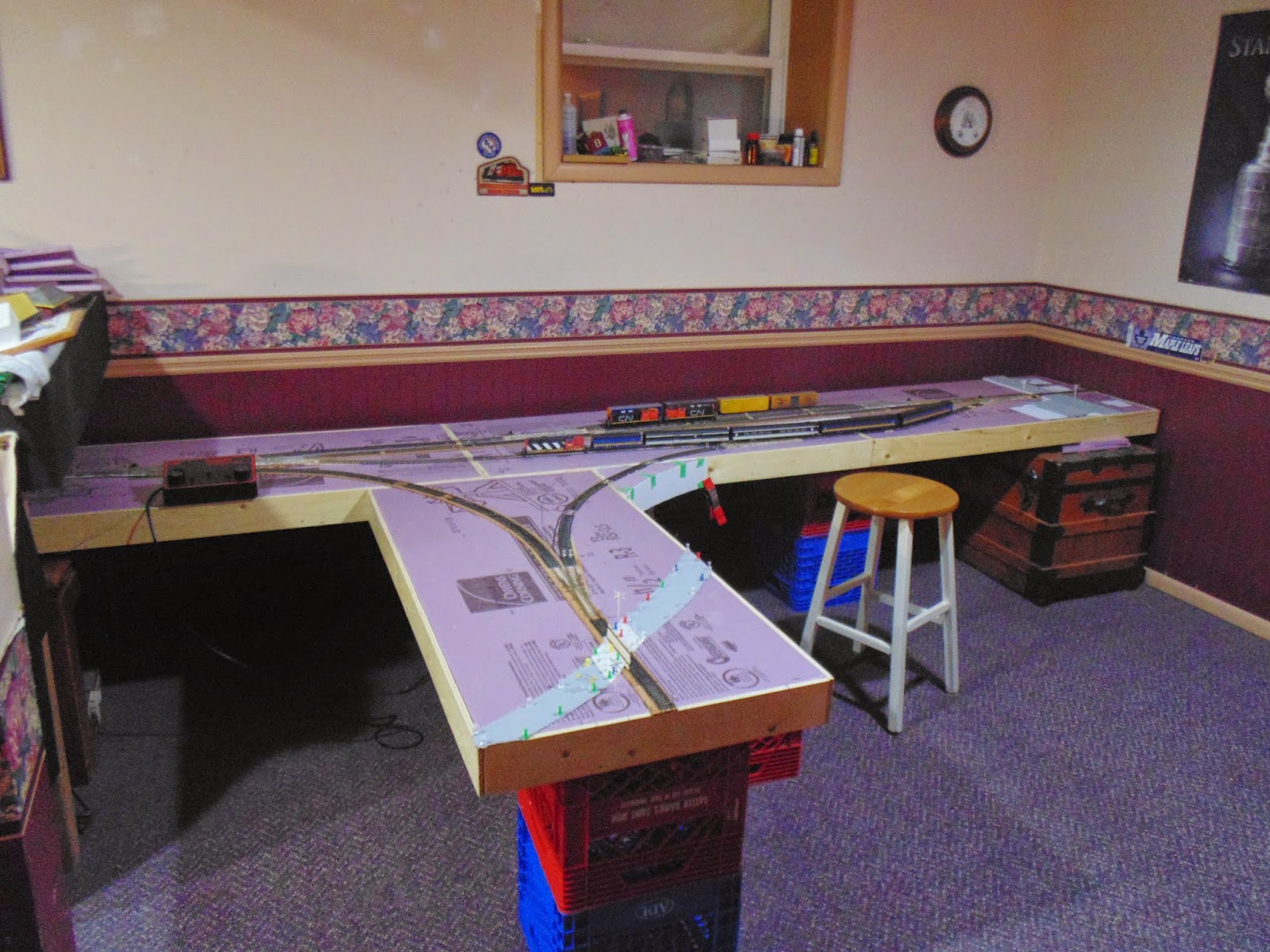 I will not have time to add full scenery to these, but I am hoping to hide the pink foam under a layer of Durabond and paint. 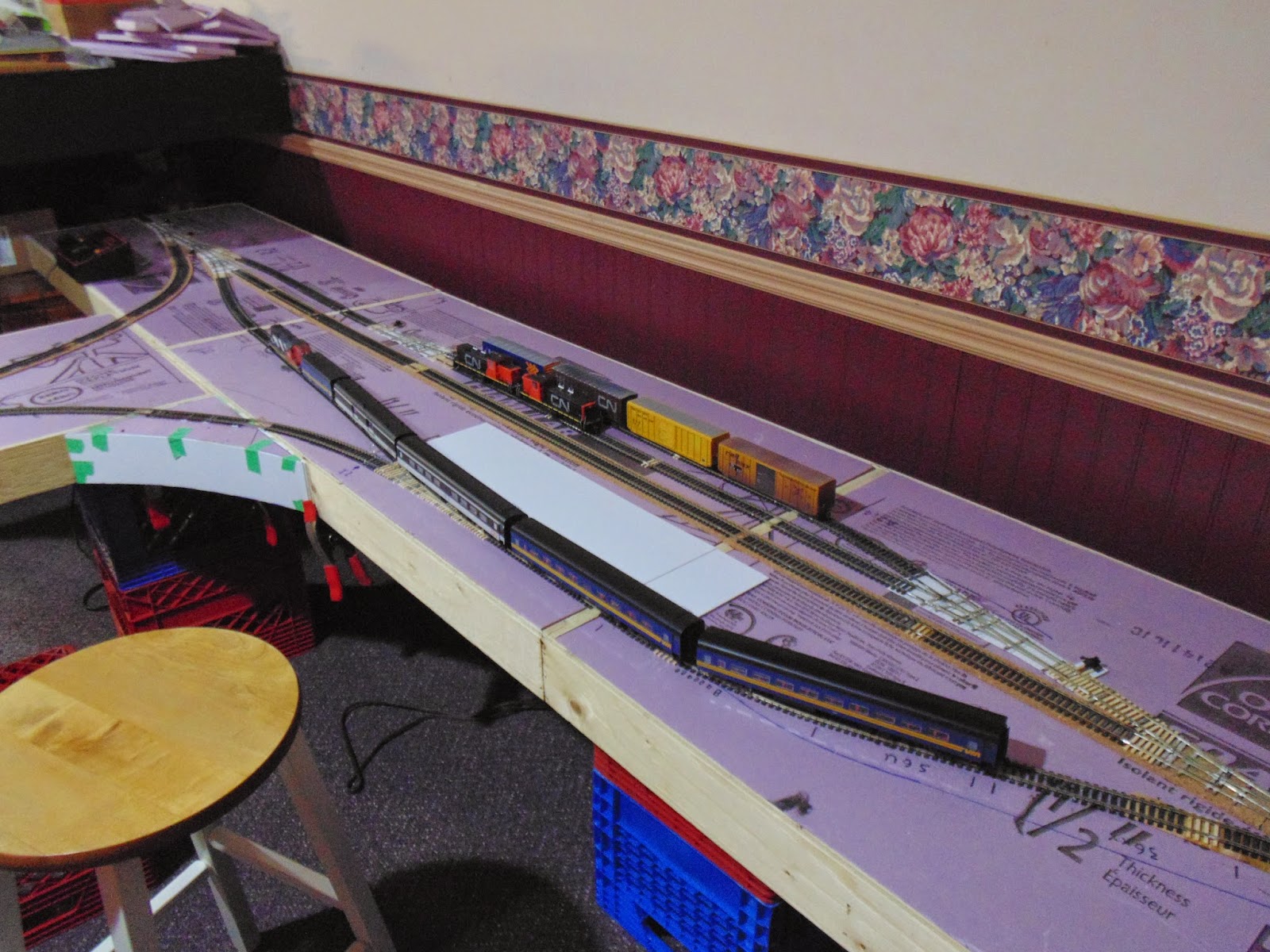 In this photo, the white styrene area represents Matapedia station.  Straight ahead would be Campbellton, to the left, New Carlisle and behind me, Mont Joli.  I was using GMD-1's to test the modules as the wheels are clean and they can creep even in DC operation (I am testing on DC power thus far)  I set a Chaleur consist up, which I plan on taking to the show.  The consist is based off one that David Morris noted back in 1983 which Steve Boyko has noted on his blog, here, http://blog.traingeek.ca/2010/02/gaspe-trains-in-1983.html 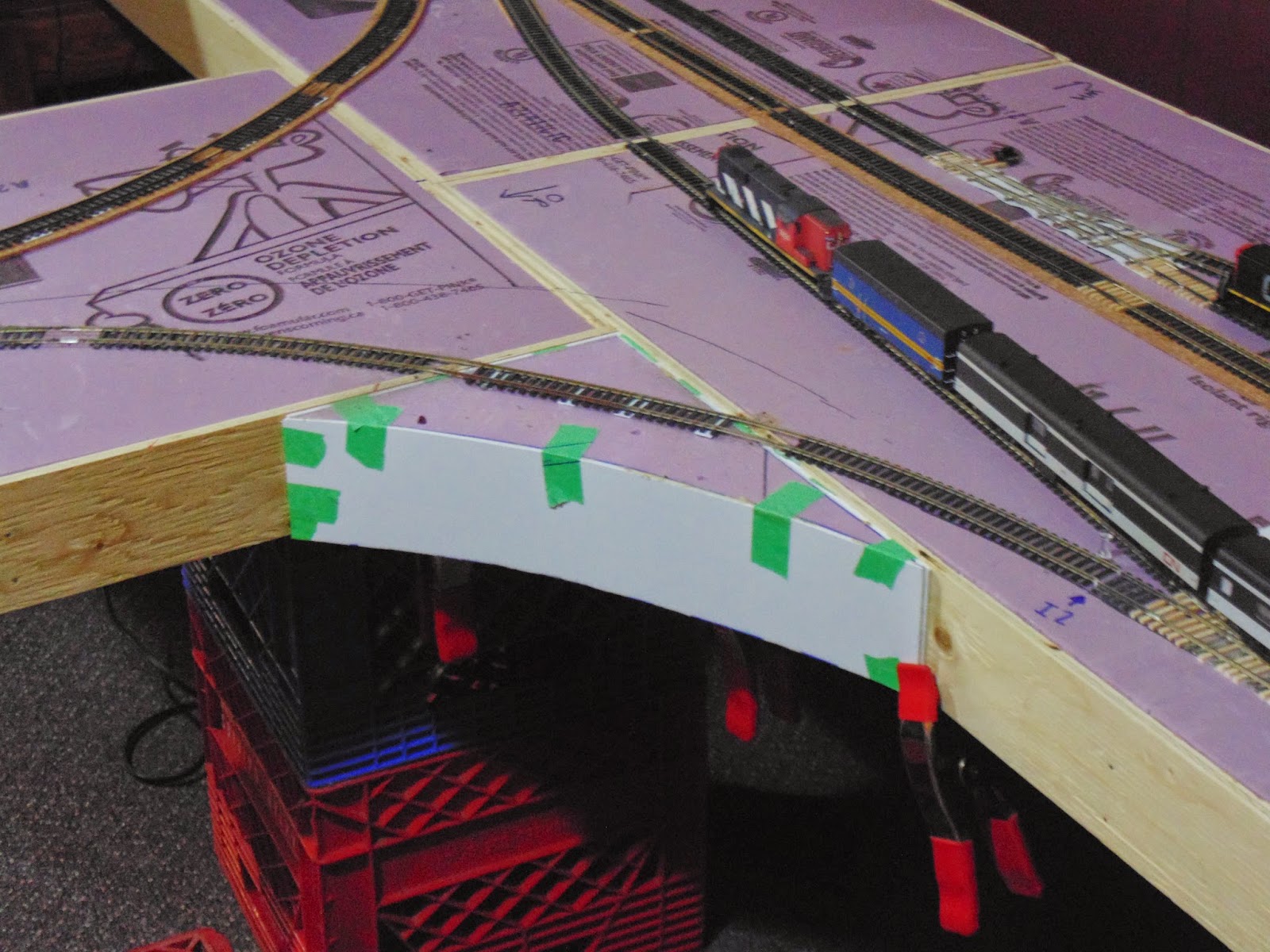 Unfortunately, I couldn't make the wye work without a small extention.  I made it from styrene and foam and it is actually quite strong.  I fully sceniced this small piece tonight, mostly to hold the track in place.  The underside consists of an identical sheet of foam, except it is cut out to allow one to access the feeder/bus wires.  The whole thing is encased in a styrene shell.