For several years now, I've wanted to go and see one particular layout here on the Island.  This past Sunday, I got my second chance.  I was invited to an operating session last winter and had to decline, but this time I was able to go.  Four of us met in Charlottetown and made the trip to Kensington.

Derwin Cole more or less models PEI locations with fictional town names.  His layout really is quite nice, well detailed and fun to operate on due to all the switching opportunities.  All in all I was thoroughly impressed, not only by his layout, but to discover that others in this province shared my interests.

His layout is DCC equipped and many of the engines have sound which makes for a really nice setup.  Basically the layout  is a "U" shape with two yards at either end.  Each end develops into an "bulb" shape to allow for continuous running from one end to the other.  As for the operating sessions, he uses a computer generated waybill system to create the orders for each train.  Everyone is given a set of orders to complete for the first leg of the session.  After a short break, everybody switches trains and runs for a while longer. 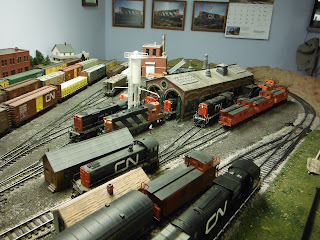 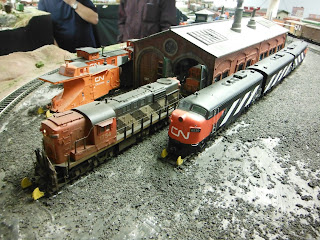 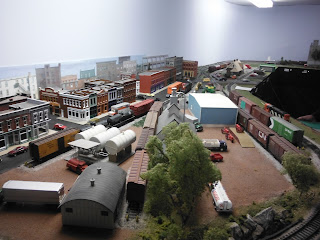 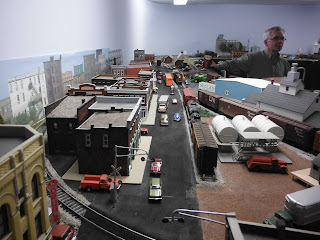 During the first half, I was engineman on a mainline freight led by CN 2001, a C630M with sound.  I was to depart Ashtown yard after my train was built and head for Shellville to drop off half the train, where my replacement crew would be waiting  to take the train back to Ashtown.  Of course, there was lots of waiting along the way, first, as the train was built, and later with meets at passing sidings and for obtaining clearance from the yard master. 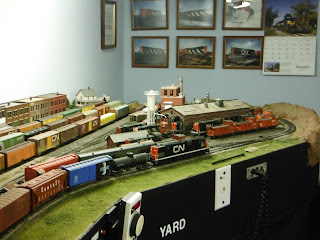 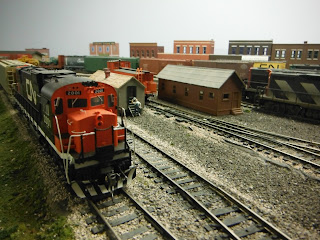 Waiting in the hole for the local to pass 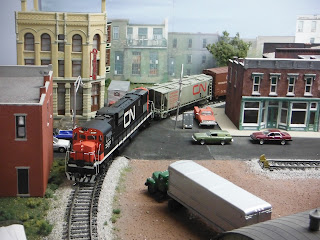 
As for the second half, I was assigned to the local, hauled by CN 8196, a S-4 by Atlas.  My duties were to set out cars for CN 2001, returning from Shelleville to Ashtown. 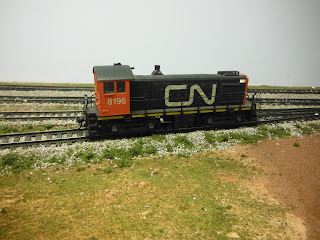 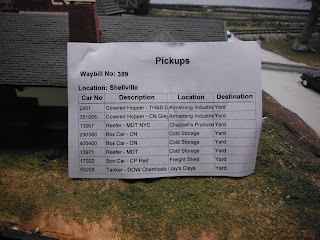 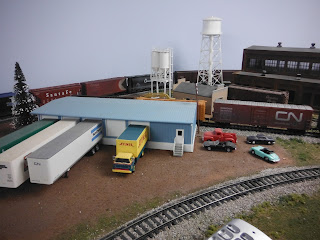 From front to back Cold Storage, Jay's Clays and Armstrong Industries. 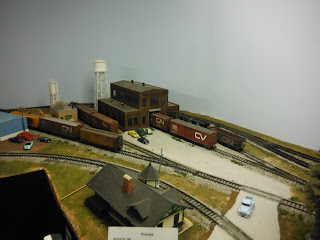 I'm told that he is not very far from expanding his layout into the next room.  Everyone there seemed to be trying to give him ideas as to how to do it, but I'm sure that whatever he decides will look great, judging by the work shown here.
Posted by Unknown at 19:16