I made it home from Toronto with a small fortune in on sale rolling stock, detail parts and fishing supplies two days later than expected due to the storm.  I was also able to get the final parts needed to finish 3624.

The base model was an Atlas-Kato RS-1, which was heavily modified with a mixture of Miniatures by Eric and Details Associates parts, as well as resin louvers and scratch built bits.  The fuel tank was completely scratch built.

Hopefully, this is the first of fleet of half a dozen or so RS-18's and eventually several RSC-14's to roll off the bench.  The second, 3709, is days away from completion.  Regardless of the locomotives I will acquire, sell, or build, this RS-18 will be without a doubt my most important engine for obvious reasons.

Here's a shot of the front end (yes, these as well as the as delivered GP9's were set up to run long hood forward) 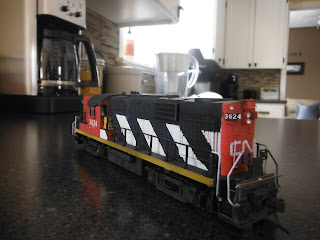 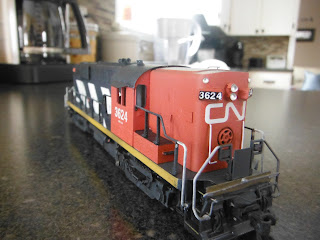 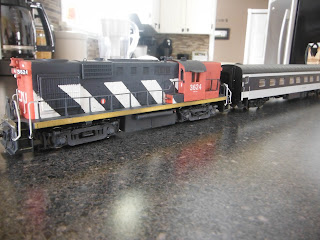 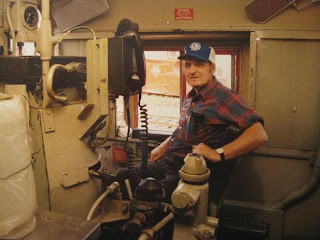 Train 594's crew (engineman, conductor and brakeman) as well as the superintendant and other "suits" from the Campbellton offices pose for a shot at Campbellton, NB.  Note the transfer van to the left and the chain link wood chip hopper to the right. 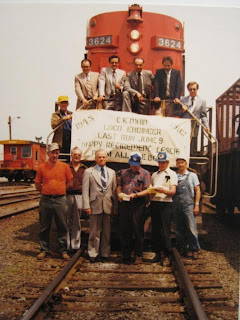 I'll post some railfanning photos and videos from the trip over the next little while.
Posted by Unknown at 18:50