I know...this isn't about trains..again.  I've been busy with final exams (two down three to go) so I haven't even looked my layout for over three weeks.  As soon as I'm done my second year of my undergrad though, it'll be full steam ahead on the trains (no pun intended).

April 15th is better known on Prince Edward Island however, as opening day of the trout season.  I went out with my trout gear hoping to track down some spring brook trout. I had come and gone in four hours and this was the result: 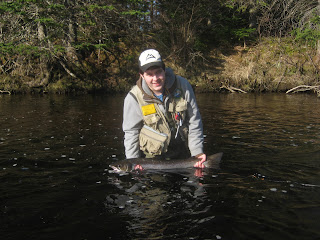 A 13-14 pound spring salmon (kelt)  on a 9ft 5wgt rod from the Morell River.   [for those of you who don't fish, try towing a car with a motorcycle].  Usually one would use at least am 8wgt when catching these. 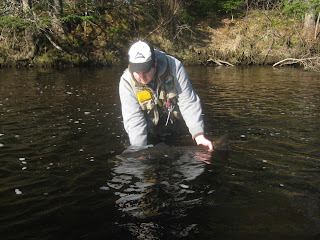 After two jumps and 200 feet up the river later, a few other boys helped me land it.   After a few kicks, the fish was ready to go, a quick and clean revival.

I promise to get back on track (again, no pun intended) next week with some railroading posts.
Posted by Unknown at 18:50