Its no secret that I've always been fascinated with CN's operations on Quebec' Gaspe Peninsula.  For me, it is a combination of a number of things.  First and foremost, its my family's heritage there.  I have ancestors who helped build the initial line and a second cousin who worked on the line as a conductor up until the day CN pulled out back in 1996.  One of my great grandfather's on my grandmother's maternal side of the family was the engineer of the first train to reach New Carlisle back in 1909, as part of the Saint Lawrence and Atlantic / Quebec Oriental Railway network.  I had a great uncle who lost his life in service, and numerous other relatives who worked on the line, eight in total I believe, all of which now deceased.  It is also my general interest in the area and fascination with the simply stunning landscape.  Most of all, it is my childhood memories of watching the last stand of the MLW's on the line along side my grandfather and father.  The passenger trains at that time were a mix of VIA blue and stainless steel coaches, lead by a mix of brand new F40's and the last of the FPA-4's.  The freights were lead by a mix of GMDD and MLW power, but mostly MLW's.  M420's, HR412's, HR616's, C630M's, M636's and RS-18's were still the ruling power here.  Even when CN pulled out, the Chemin de Fer des Baie des Chaleur would use leased MLW's though CANAC until late 1999.

The benchwork pictured below was for a layout I had started about two years ago. About a month ago, I decided to tear the unfinished layout down, remove a small peninsula (return loop) and build a small, switching layout based on a prototype located in Chandler, PQ (namesake of the Chandler Sub). All track will be ME code 70 and all the switches will be handlaid using ME code 70 rail. The sleepers will be a combination of wood and PC board.

I've always thought of filling a basement with a layout spanning the 204.2 mile run between Matapedia and Gaspe.  Someday.  Chandler is the most interesting area on the line due to the switching opportunities and private trackage in the town. It will help to satisfy this desire for the time being.  The whole area sits on a massive S curve.  The town was dominated by the Abitibi Price paper mill, which closed in 2002.  This also spelled the end of regular freights past New Richmond. The first time I can remember seeing it on a trip to Perce Rock back around 1997, at the time it was the largest building I had ever seen. The town held onto the mill for the next 8 years, finally beginning to dismantle it in 2012, a process that is still on going.

Below are some photos of the preliminary track plan.  It has been planned with switching operations in mind.  In reality, CN owned the main as well as a passing siding.  Everything else was on company property.  There was a small yard consisting of three interchange tracks where CN 594/595 would spot cars. The mill switcher would then disperse these cars across the property, replacing them with cars pulled from the mill.  There was also a single track which paralleled the CN main and crossed at a diamond about a mile east of the VIA station.  Once across the CN main, the tracks led to a small tank farm for the mill as well as a deep water wharf with tracks right down the center.  Since the line was dark territory, a flagman was hired to wave trains through the diamond, a practice which lasted up until 2002.

There are some photos of the mill available on Google.  The mill tracks had been recently removed in this photo, but one can get a feel for where everything was. 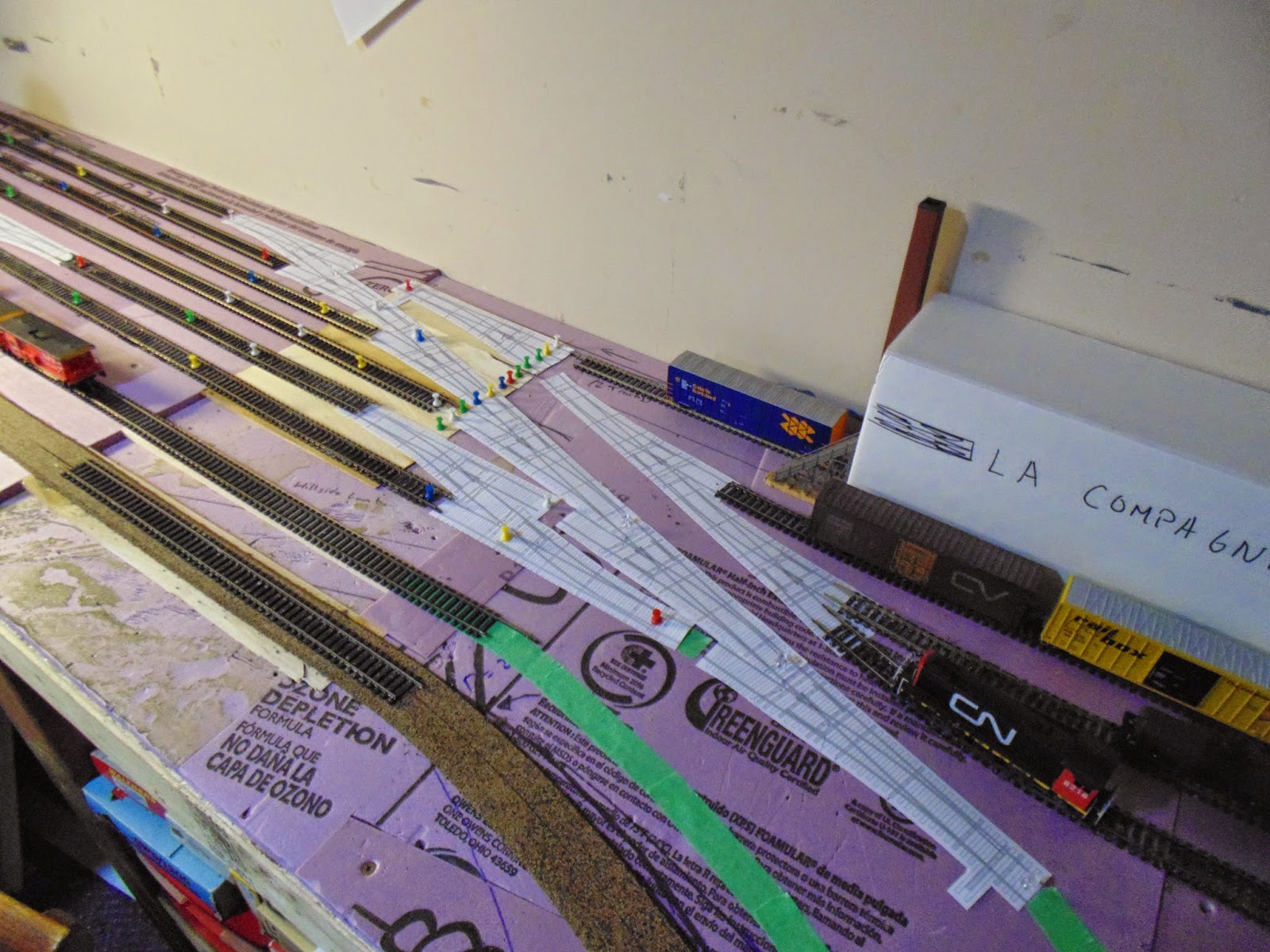 "Yard ladder" - in reality there was a main, passing siding, two interchange tracks and two other tracks owned by the Price Mill. All of which were lenghty, double ended tracks. 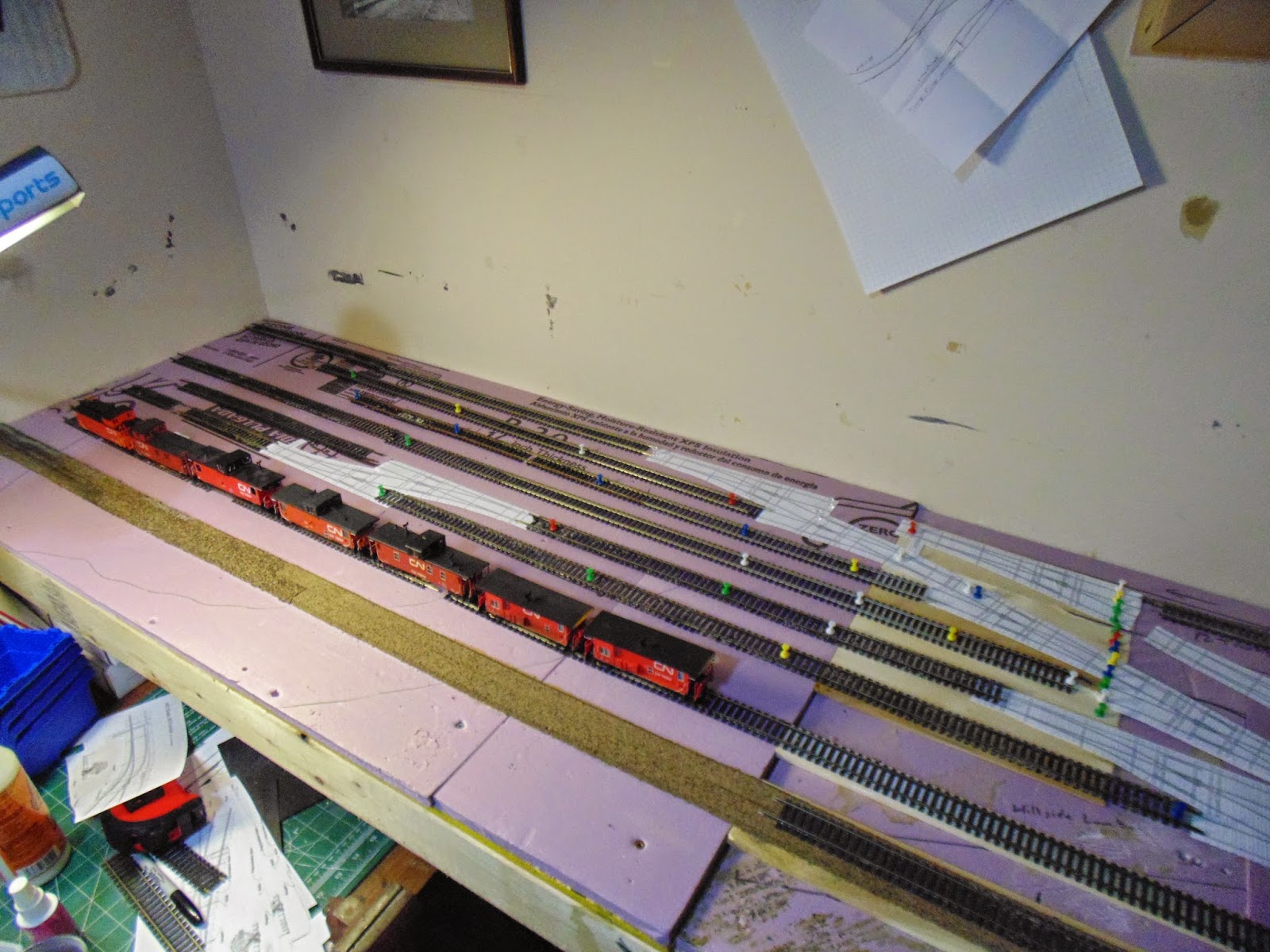 From front to back - CN mainline (Chandler Sub), passing siding (will act as a switching lead into the interchange yard), run around track, run around track (these will be empty between sessions but will be used to drill cars into during a session), Price Mill tracks one through three, lead into the newsprint rolling building. 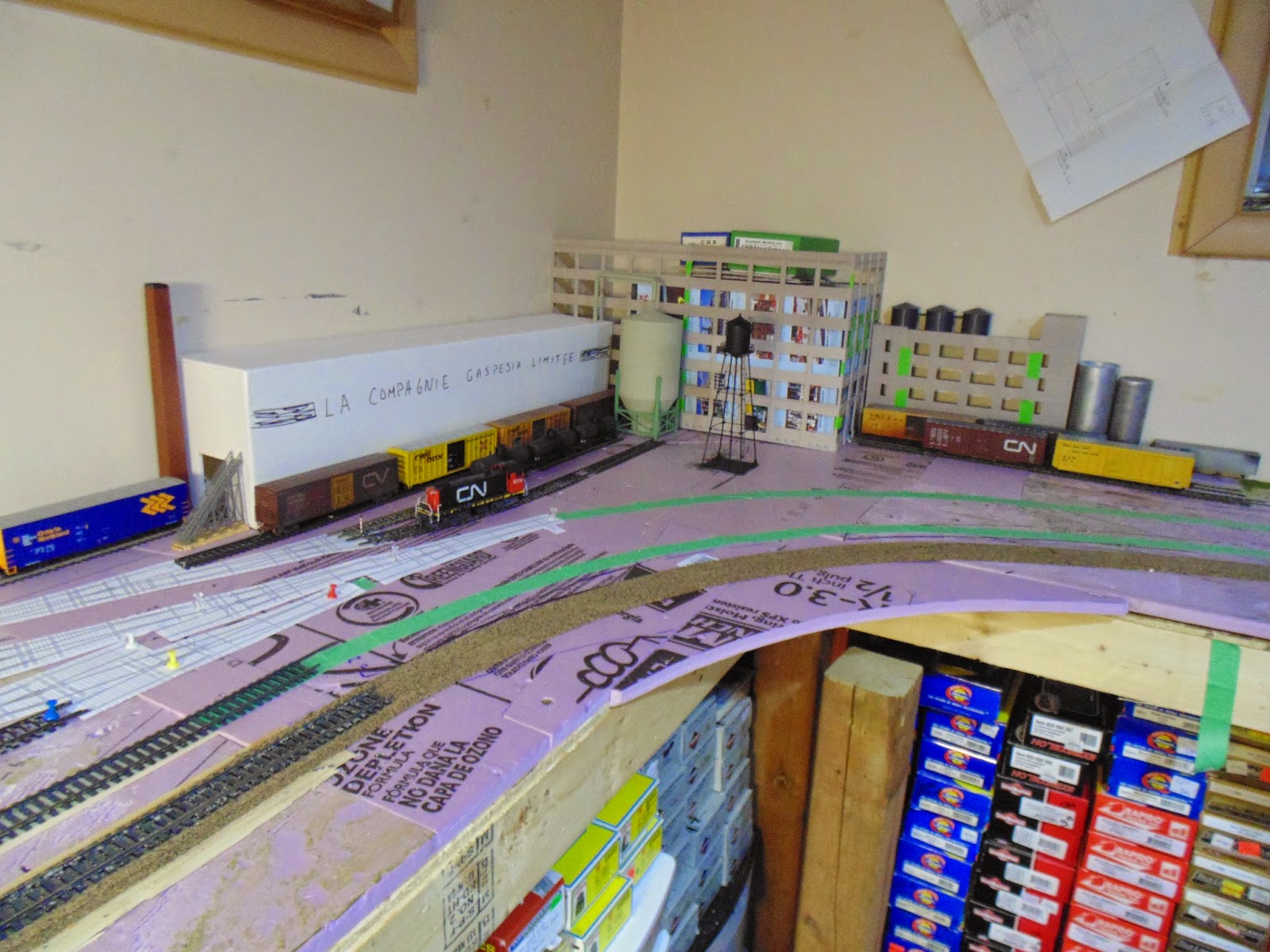 La Compagnie Gaspesia Limitee (Gaspe Paper Company, LTD) which was originally started by the Price family in the 1920's. Later it would become part of Abitibi-Price, and finally Abitibi Consolidated before closing in 2002.Dismantling of the mill began over the summer of 2010 and is currently ongoing. 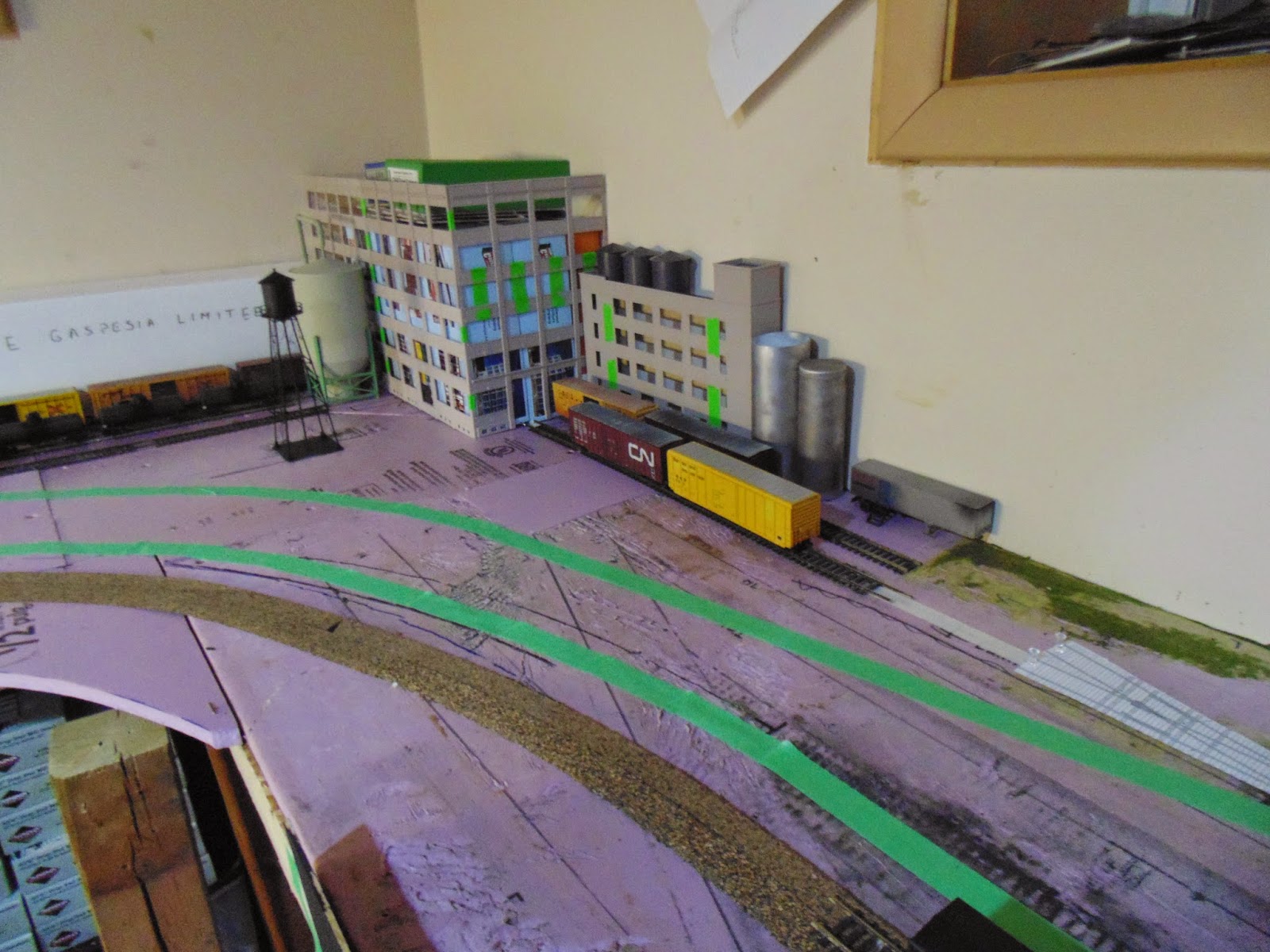 The white building (foamcore) represents the print rolling building. The building in the middle was created from two Walthers Furniture Companies, whereas the last building was a Walthers River City Textiles background structure. The Mill will be served by two tracks and the rolling building by one. 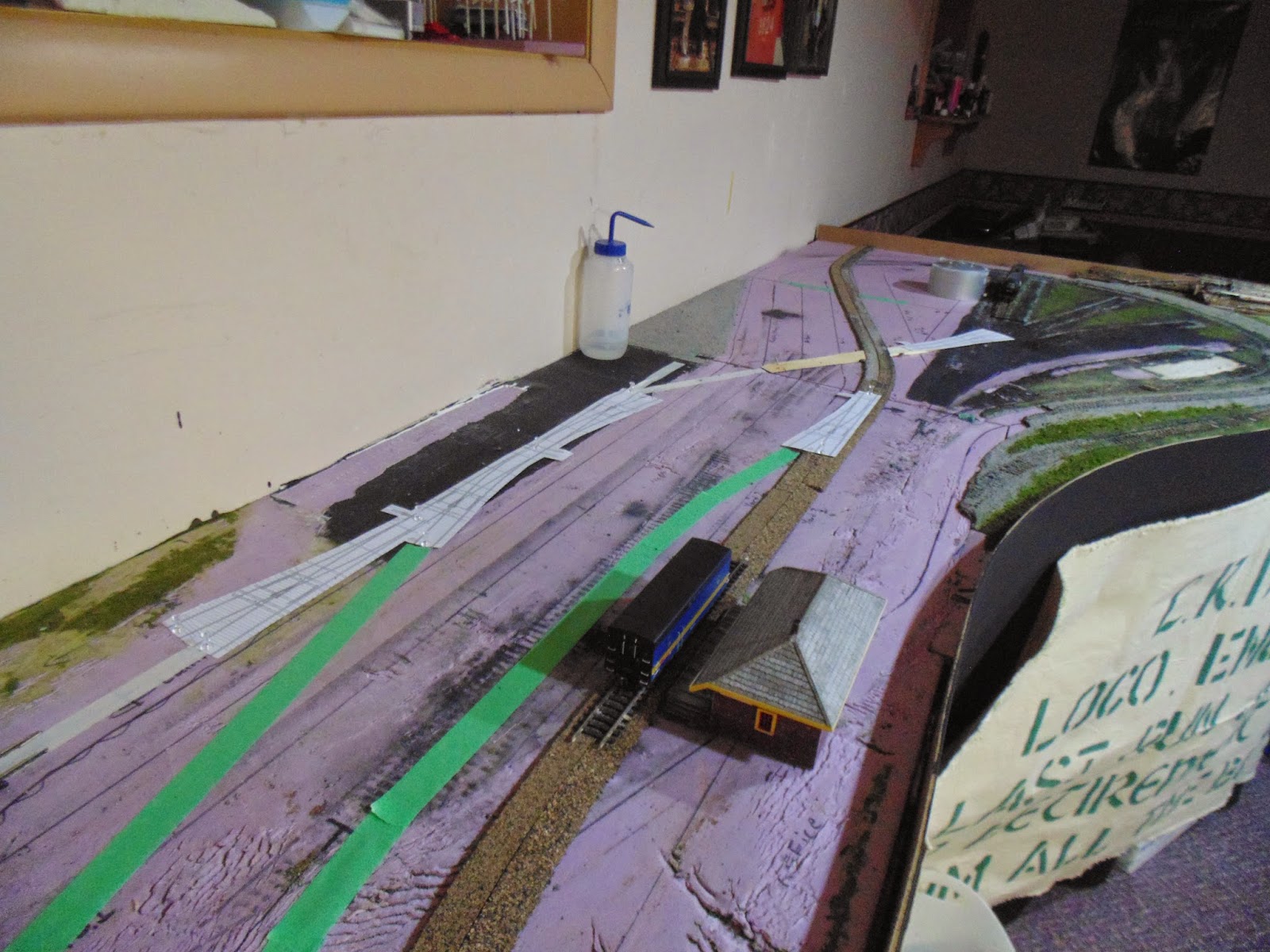 PEIR Fredericton station acts as a stand-in for where the VIA station will be located. As per the prototype, the company tracks cross the Chandler Sub at a diamond, where all trains must come to a complete stop before being waved on by a flagman. This practice continued until the mill closed. To the right of the Chandler Sub lies a small tank farm and a rail served wharf (both company owned)