A Switching Layout in HO

Chris got bored with whatever he was working on (in this case, his most recent switching layout) and tried to send it off to the first bidder.  This time, I was lucky as the item in question seemed to be up for grabs internally before it hit his blog.  Long story short, I received Chris's switching layout consisting of beautifully handlaid Code 40 track.  After a little mix up in getting it home (half went up to Kensington while the other half stayed in Charlottetown) I finally got it home a couple of weeks ago.

The downside is that I think I'm beginning to develop to many projects, looking at my uncompleted layout as well as the pile of locomotive and freight car projects on the be.  Since I have everything on hand I hope to have this finished before the start of fly fishing in mid-April.

Last night I finally had the chance to work on it.  Since it was cut in half, I decided to straighten it out and add in a section to being it to an overall lenght of 7'.  I plan to build the front/back out to around a foot and a half once all is said and done.  The layout will separate in the middle for easy transport.  I will mount a backdrop of masonite 1.5' high on the back decorated with photos of the Appalachian Mountains, taken around Nouvelle, on the Gaspe Peninsula.  After thinking about it, I ended up with the following track plan:

The idea of the "spur to nowhere" is basically to act as a lead into the engine storage and will disappear into the scenery behind the warehouse.  The mainline in green will be handlaid code 100 track whereas everything else will be code 40.  Last night I was able to create a mockup and lay most of the ties. 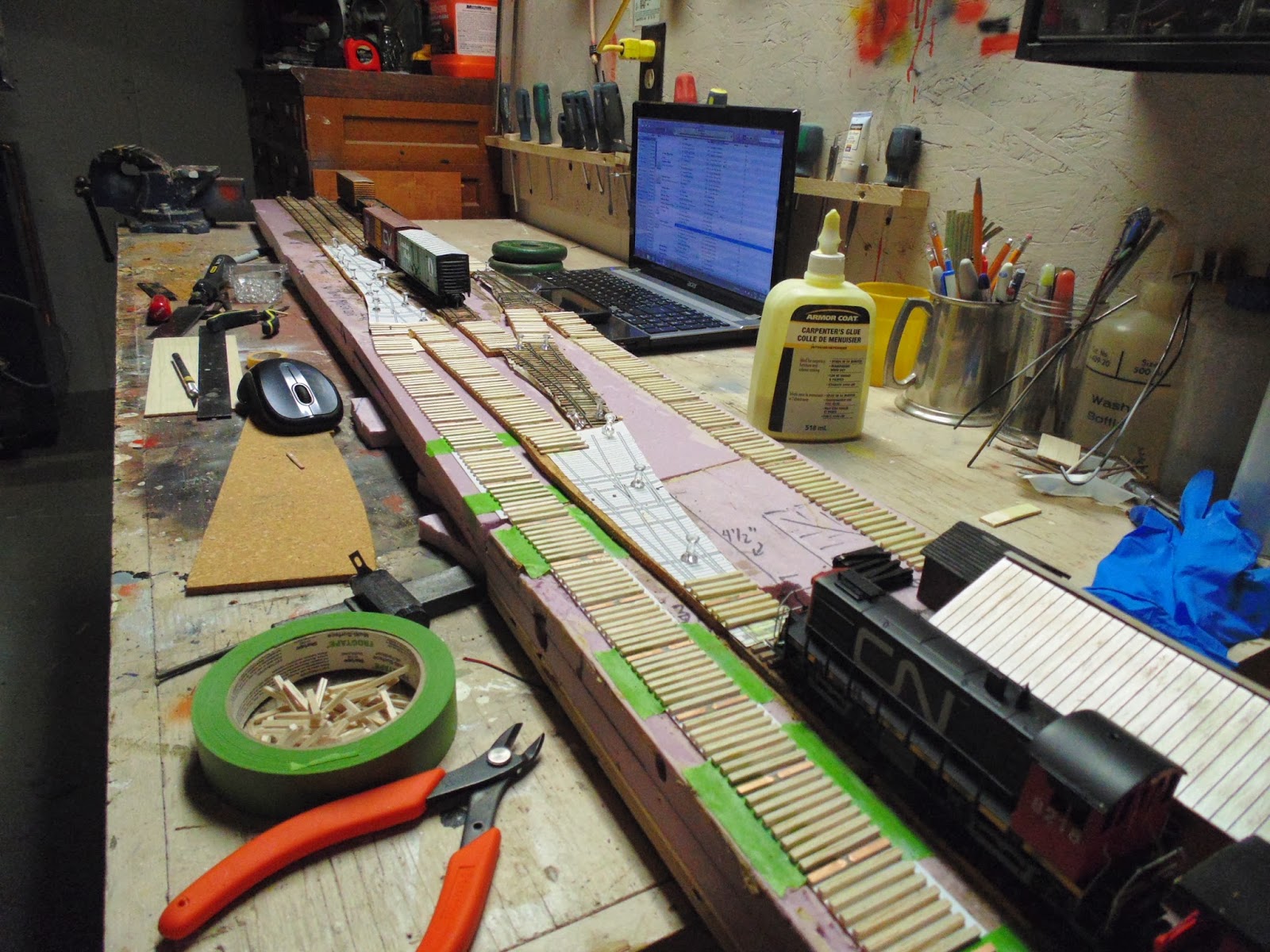 In this view it is really easy to see how much of Chris's original plan will be retained and what will be changed. 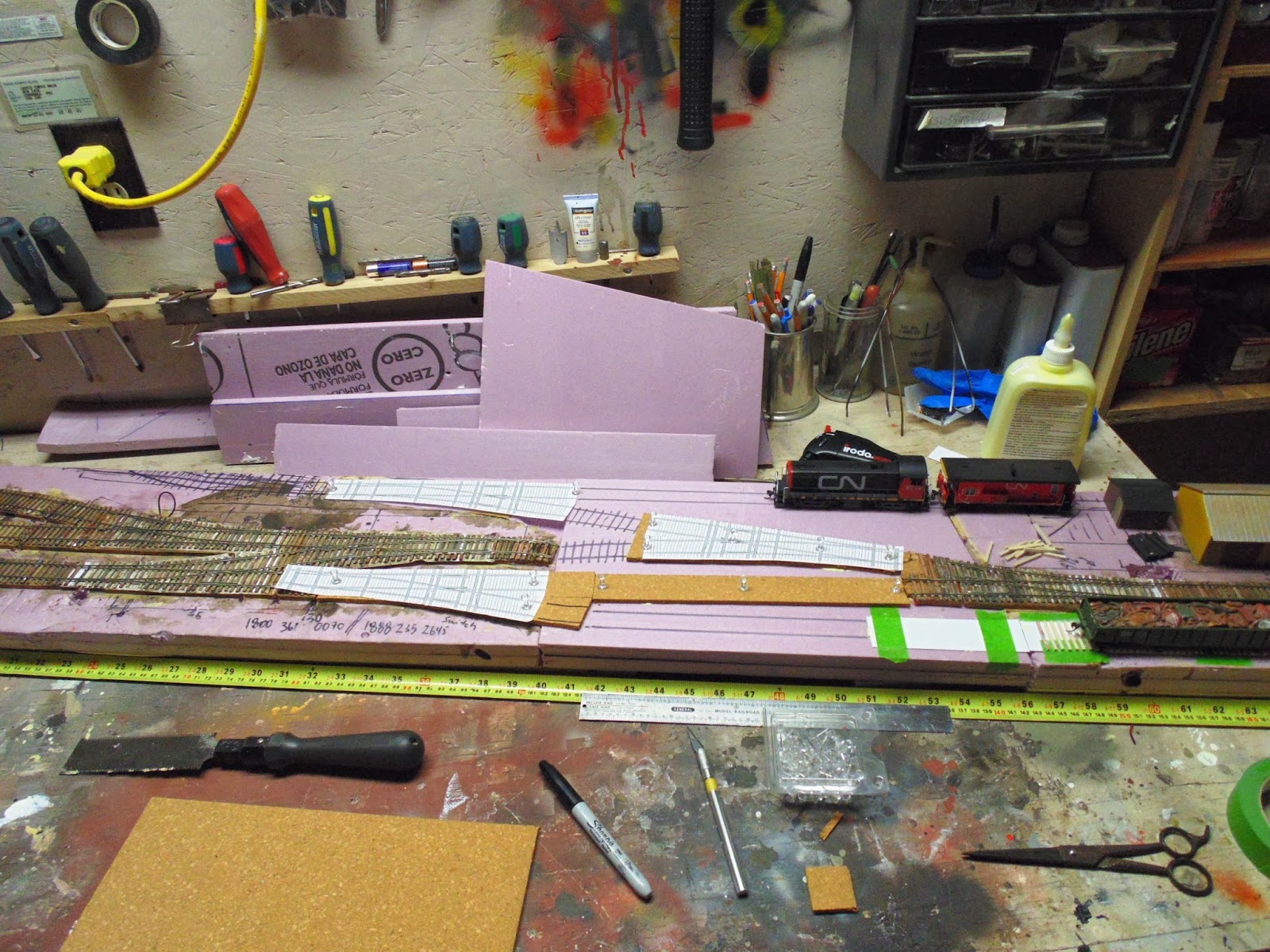 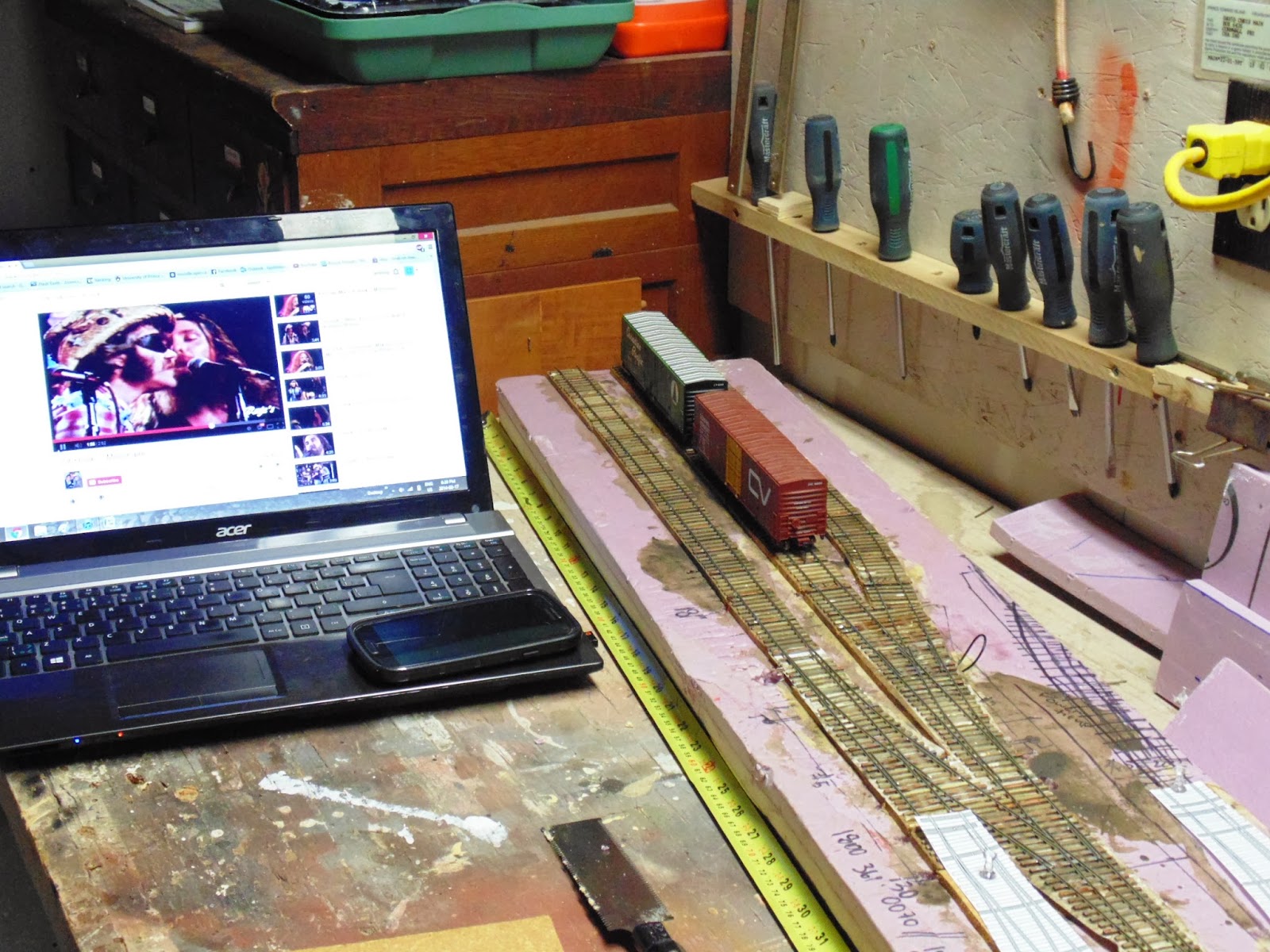 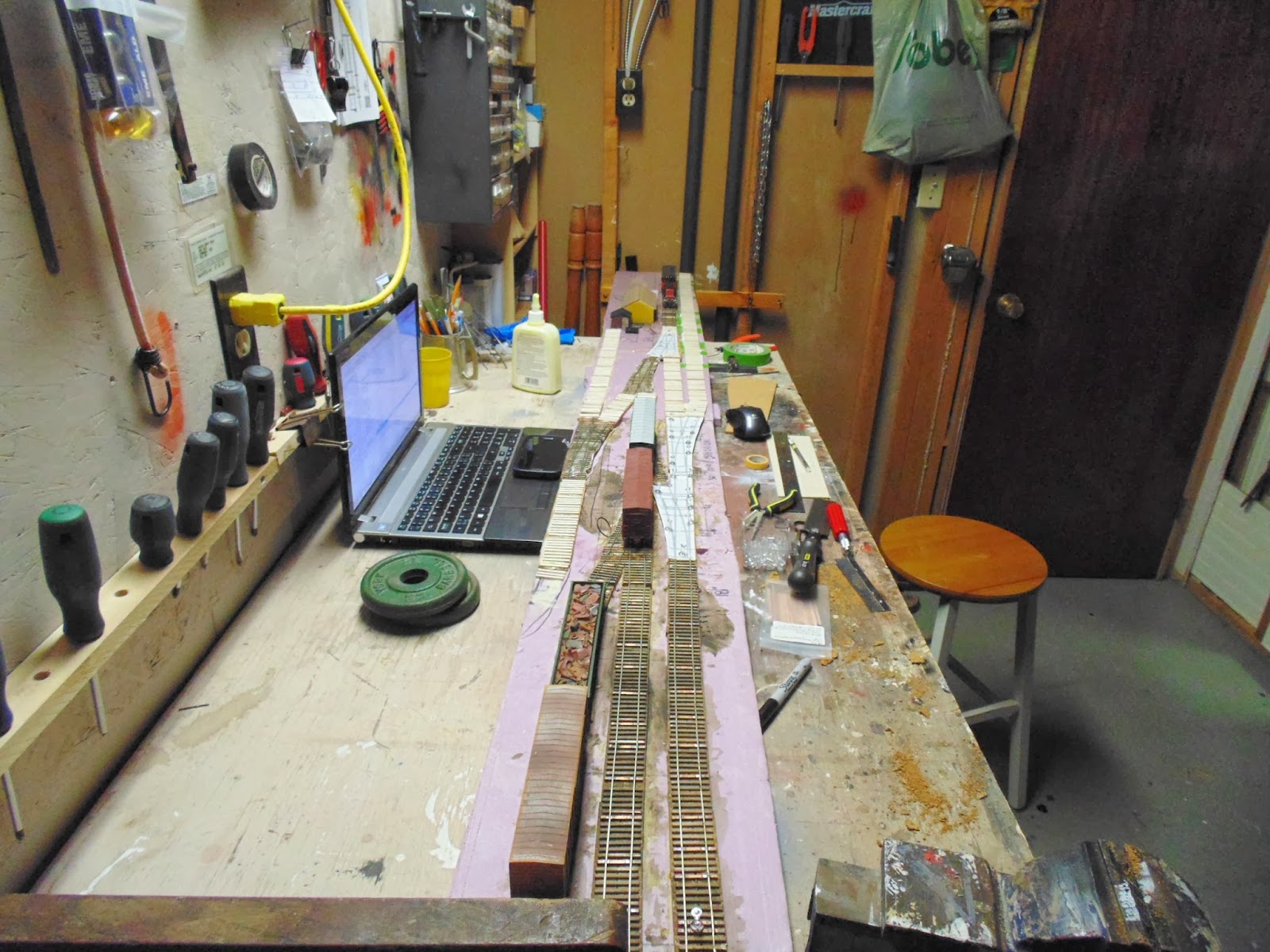 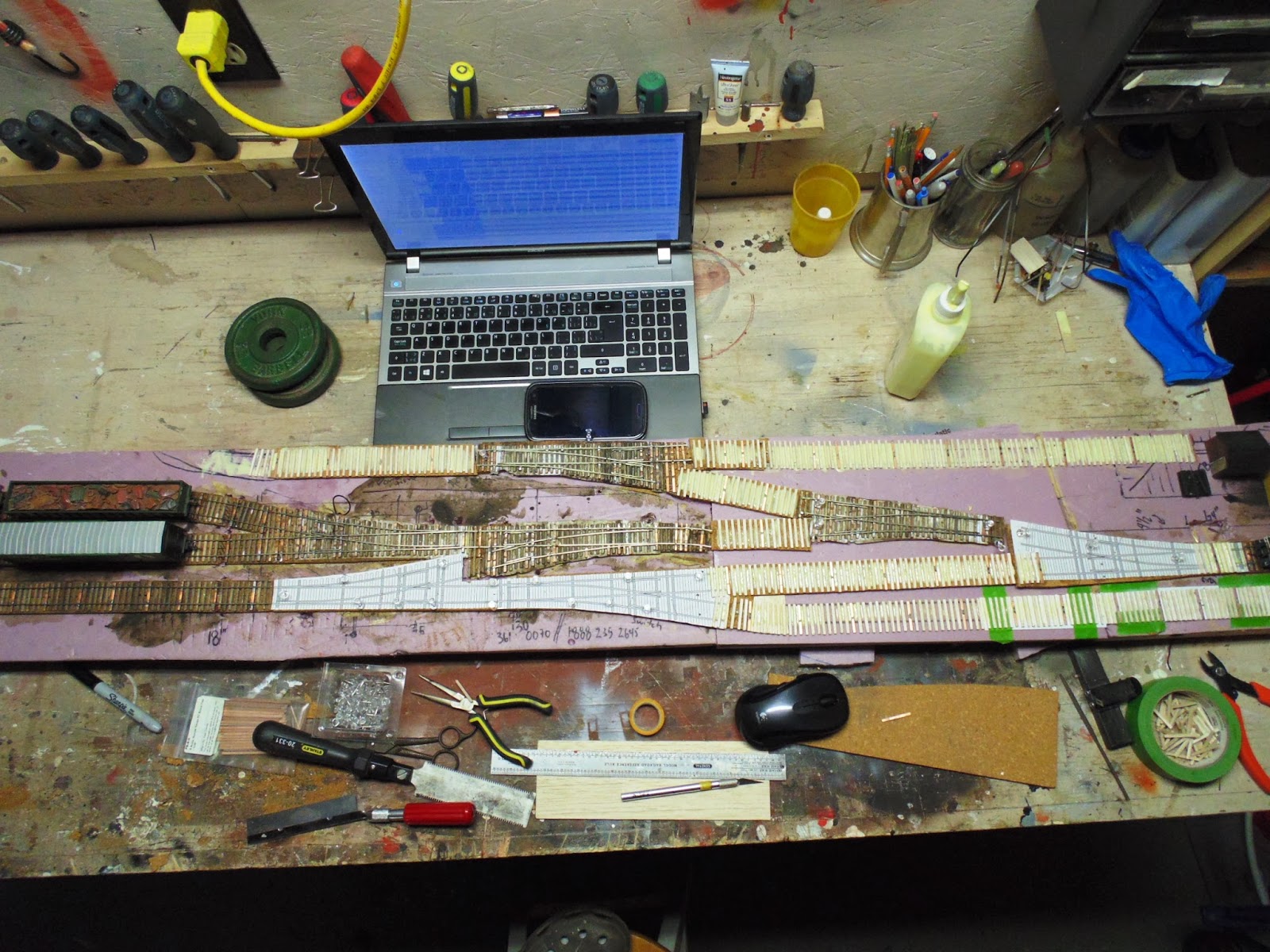 Tonight I laid 1/4 of the total code 100 rail left to be laid.  I also removed all of the code 40 that was on the present mainline and salavaged it for the sidings.  The difference in rail height should provide for an interesting comparison.
Posted by Unknown at 19:42