Save the Northern New Brunswick Trains

I stumbled across a fantastic group on Facebook the other night, entitled Save our Trains in Northern New Brunswick.  Less than a month ago, the Ocean was reduced to three days a week from six.  With the state of Acadian Lines and the lack of regional airports it would become difficult for those residents to travel should they lose the train as well.  I know Charlo, Bathurst and Mirimichi all offered regional flights but Charlo's flights have since been moved to Bathurst.  All of this has several of my undergraduate friends studying in Charlottetown but spending the rest of the year living at home in Northern New Brunswick and on the Gaspe worried.

Worst yet, CN has begun the process of abandoning the INR line between Moncton and Campbellton due to increasing maintance costs and decreasing customers.  They would like to up and leave by 2014.  Rail service in Eastern Canada is certainly a shadow of its former self, with CP selling off its lines east of Megantic, QC in the early 1990's and CN abandoning or selling everything east of Montreal but the ICR and   NTR in NB, and the Amherst-Halifax line in NS. 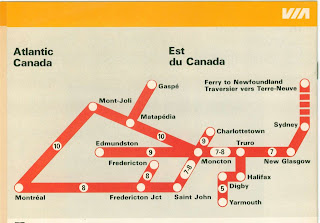 This was the state of passenger service in 1989.  At this time, CN had just abandoned the NFLD railway and Charlottetown and Fredricton were connected with a bus service.  The entire system of PEI would be abandoned by the end of the year.

The site also has some fantastic historical photos, many of which I have never seen before.  Most focus of the northern part of the province, particularly Campbellton, but there are a few Gaspe and even some Tide Head shots as well.