On May 13, 2012 the first passenger train in over a year reached New Carlisle.  I was there on the following Saturday.  Hard to believe. but in all my trips to the Gaspe I had never seen a train turn on the wye before so I was happy to finally do so.  I didn't realize it at the time, but this meant seeing a lone F40PH running without any coaches.

The work on the double bridge in Cascapedia-St Jules is complete, although honestly nothing visibly has changed.  The Pabos bridge is still under repair but work on the pillars is not yet complete.  I wonder if the slow order on this bridge be lifted now?


The process for turning the train is actually quite simple.  The train must be turned in two sections however, as the wye will only hold three coaches and the locomotive.  First the passengers hop onto a motorcoach for the second leg of the trip. 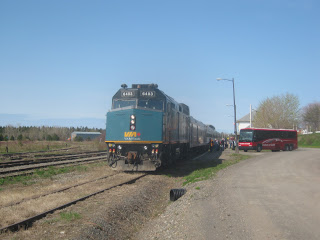 The entire train is first pulled east to clear the passing siding. 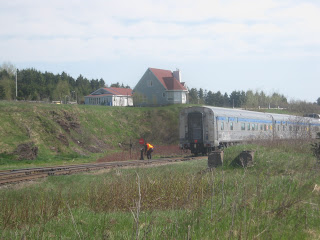 The two sleepers are dropped on the passing siding while the two coaches and the baggage car are left on the mainline. The locomotive then couples onto the sleeper cars and pushes them backwards onto the wye. 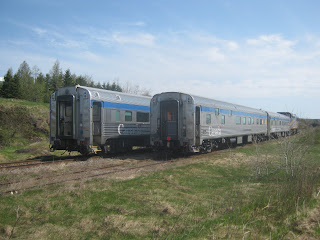 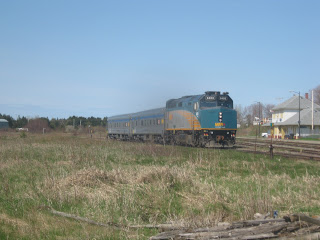 Once clear both the east and west legs, the train heads out in the opposite direction and sets the two coaches onto the mainline. 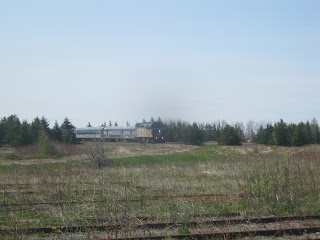 The neatest part, in my opinion, is when the locomotive runs back over the wye to pick up the remaining three cars.  The rear riding platform would really come in handy here... 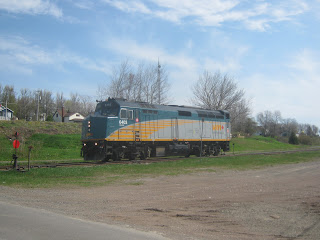 The whole operation takes a little over an hour, provided everything goes to plan.  The train actually derailed on the wye however during the first week of June, just days before my second trip up this year.  It happened when the locomotive was running back alone to pick up the remaining coaches.  As is the case with much of the line to Gaspe, there is a permanent five mile per hour slow order on the wye.  The locomotive made it about halfway up the west leg when both rails spread apart and the rear wheels went on the ground.  It took a 100 ton jack and one of the SFG's cranes, but several hours and some new ties later the train was back on the rails.

In any aerial photos, a large pond is visible between the yard and the bay.  Years ago, CN dug shale and sand from the area to build up an embankment.  Brackish water from the bay eventually seeped into the hole.        The area around the wye itself was soft to begin with and the tracks sink as the train travels over it.  The last solid ground towards the bay is the the site of the former car shop on the west side of the yard and the site of the old Texaco oil tanks to the east.  Today a single stall engine house rests on the northeast corner of the old shop floor and all that marks the old oil tanks is a rusty fence.
Posted by Unknown at 22:56