I apologize to my few readers about the lack of posts lately, but from here on out I am going to try and stick to an at least once a week schedule.

I have been pretty busy with work and June saw some great fishing so I had little time for the model railroad.  After that I made several runs up to the Gaspe but those are over for now.  I saw some great VIA action beginning with the second run of the train from Matapedia to New Carlisle in over a year.  I was also very fortunate to see some classic CN power shunting cars, or "friggin' around" as my dad would say, in Campbellton, NB. 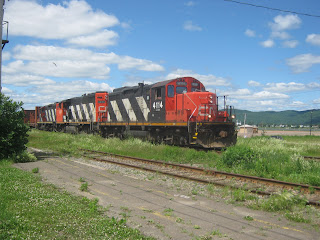 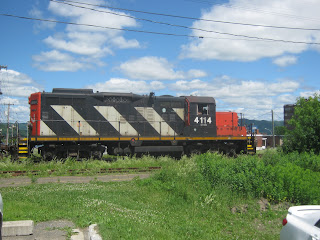 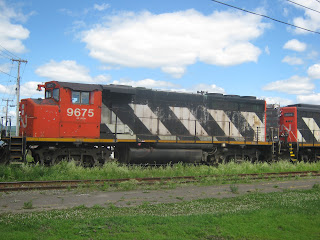 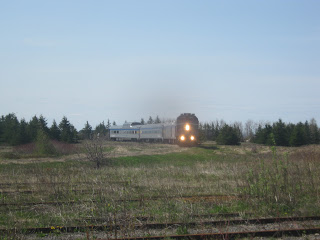 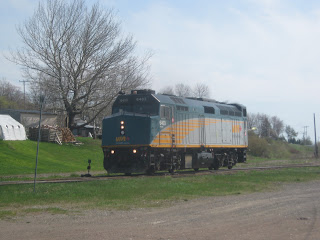 In the past week however, I've been bit by the model railroading bug again and I've begun to work on some projects again.  It might be the month long drought that has caused the fishing to literally "dry up" or even all the travelling. In three consecutive evenings, I've partially painted and decalled an RS-18 for myself, as well as an SD40-2W for a client.  I also managed to find a few more projects I've been considering for a while on ebay, so in short lots of work.

All in all, the summer's over half gone and then the real model railroad season can begin!

For some reason I didn't take a photo of the best engine of all on that yard train, a narrow cab 4700 series GP38-2. Here's a video of the same train, minus the GP9, taken by a Youtube friend.  Also if you look close at the GP40-2W you can see the green paint, showing through from its GO Transit days...who knows, with any luck, my uncle drove it at one point.
Posted by Unknown at 19:43