Recently, a man from Charlottetown contacted me to see if I would do some custom painting for him.  It turns out he had been following my youtube channel for a while and ran into my mother as a salesman at local furniture store.  She gave him my email and he messages me that night.  It turns out that he is sort of a "one day I'll have a layout" kind of guy and keeps buying things online to add to his collection.

Currently, he would like to model CN's last train to leave PEI, (as would I) aboard the John Hamilton Gray on December 28, 1989.  Allan Graham's A Photo History of the Prince Edward Island Railway documents the event well, "The time is 11:30 p.m. December 27, 1989 as I drive up to the Borden yard office.  This would be the last trip; it would amount to a few switching moves in the yard before two engines would take two flat cars loaded with maintenance-of-way structures, two tank cars, four flat cars used as ferry spacers, two loads of scrap metal in gondolas, two plows and two vans along the 1/3 mile or so of track to the ferry dock."

I cannot make out the number of the Irving car when looking at the photos of the last train, however, with a little help from Steve several months back, the following photos were discovered:
The first, depicts "new Irving oil cars in July 1966, St John, New Brunswick 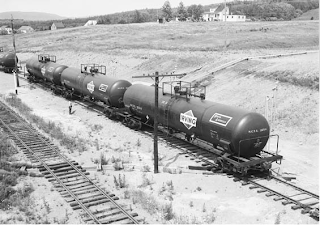 and the second, Irving company cars being unloaded into tanks at the Edmundston Fraser mill in April 1971. 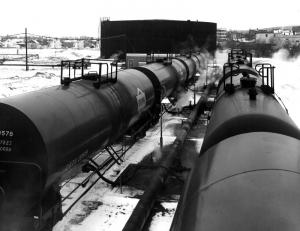 Here is the logo on the GATX car:

Here are his posts on the topic: Irving Oil Tank Cars and More on Irving Oil Tank Cars.  I am currently tasked with helping the man model this train.  Currently, he managed to find an Overland Brass model of CN 1750, with near perfect detail I might add, and 1786, a kitbashed Kato/ Atlas RS-11 model from another internet friend of mine is on its way.  He next wants to model the two tank cars and we are currently looking into decals for the Irving cars.  I would certainly like a few sets myself as they really are neat cars to model.  Maybe I'll pick up a few tank cars in Toronto next week.