This old dusty photo has hung in our basement for as long as I can remember.  I often asked about the history of it, but I never really got a straight answer.  That all changed with our latest trip to the Gaspe.

After hearing that the train was running again I went down to the station on Saturday and as I often do, I ran into Dominique the Stationmaster and I was finally able to drop off my photo for the 2013 Trains en Gaspesie calender. This is the photo, taken at New Carlisle, depicts the first train to reach the town in 1913. 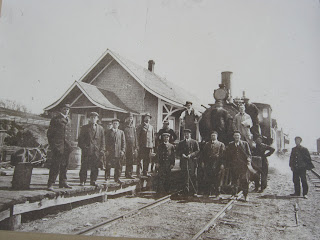 I finally found out this photo's history from a family friend.  She had been talking to Bernard Babin, the man who puts together the calender and he kept mentioning a "young man from PEI" who had a copy and she put the rest together when she saw me at my grandfather's 90th birthday celebrations at the Town Hall later that day.  It turns out that it was after my great uncle was killed in the 1969 wreck at Point a la Garde that the photo was discovered.

The lady in question is my great uncle's sister and law and she was helping clean out the old family house in New Carlisle West shortly after.  This was the house that my grandmother's family grew up in.  She discovered the original copy in the attic in an old trunk, along with her mother, who was a next door neighbor of my grandparents.  (is it just me who enjoys how small towns work?)

Four copies of the original were made: She kept one, my grandfather got another and I can't recall what happened to the other two copies or the original.  I have several relatives in this photo including my great great grandfather.  My grandfather gave this photo to my father and it has hung in our house in PEI ever since.

A few later copies can be found in a quick Google search and a few copies circulating around various families who have ancestors in the photo.  There is even a large display at the town's museum, The Kempher House.  Normally I wouldn't take photos, but since this is a copy of my grandfather's print and he identified ever person in the photo, and donated the section of rail in the lower left hand corner, I snapped a quick shot several years ago. 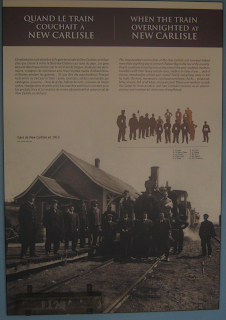 It's hard to believe one photo can have such a history!